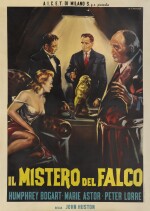 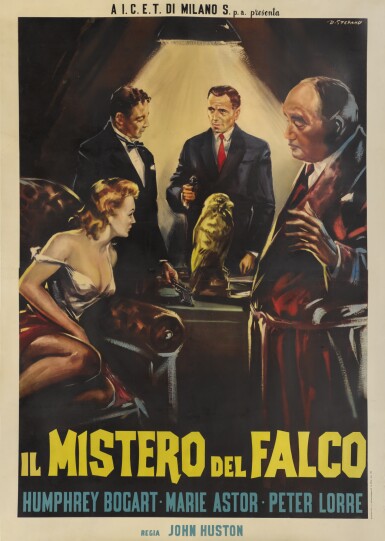 This landmark film noir was written and directed by John Huston and was his directorial debut. The film is based on Dashiell Hammett's novel of the same name, and stars Humphrey Bogart as private investigator Sam Spade, Mary Astor as his femme fatale client, Peter Lorre, and Sydney Greenstreet. This was Greenstreet's film debut at the age of sixty-two. He had previously worked as a theatre actor. His portrayal of Kasper Gutman is captivating, and gave him the memorable line 'I couldn't be fonder of you if you were my own son. But, well, if you lose a son, it's possible to get another. There's only one Maltese Falcon'.

This poster features the key characters, Humphrey Bogart, Sydney Greenstreet, Peter Lorre and Mary Astor all crowded around the illusive Maltese falcon. It was very typical of the Italian distributors to depict female stars in a provocative fashion. In this poster Mary Astor is rather scantily dressed, and although a femme fatale she does not appear dressed like this in the film. This rare Italian poster is one of the most captivating on this legendary title.

Exceptionally rare Italian poster for the limited Italian re-release of the film.