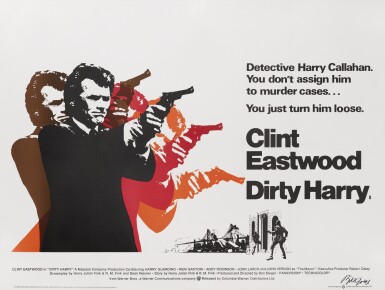 This film was produced and directed by Don Siegel, and was the first in the Dirty Harry series. Clint Eastwood plays the title role, in his first outing as San Francisco Police Department Inspector 'Dirty' Harry Callahan.

The graphic designer Bill Gold was one of the most respected poster designers in the industry. He designed posters from 1942 until 2011 and was responsible for all of Clint Eastwood's posters, from Dirty Harry to Mystic River (2003).