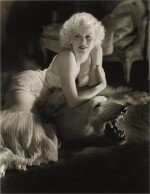 Jean Harlow, nicknamed 'blonde bombshell' and 'platinum blonde', was a huge star and sex symbol in the 1930s. She made her first major film appearance in Hell's Angels, Howard Hughes's 1930s war drama. She was then signed by Metro-Goldwyn-Mayer and starred in many notable films, including Red Dust (1932), Dinner at Eight (1933) and Reckless (1935).

This photograph has the 'Hurrell' stamp on its reverse.