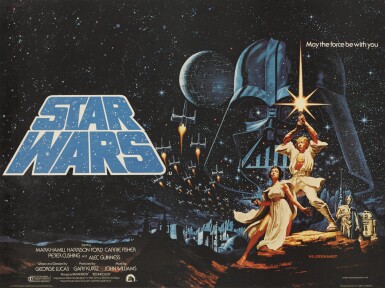 This was where it all began back in 1977, when George Lucas brought us the beginning of the Star Wars empire.

The Hildebrandt Brothers were commissioned to design this poster for the British release of the film. Star Wars was released in America in May 1977, and did not get released in the UK until December of the same year. By the time the film was released in the UK the studio felt that the characters were already well known, and the Hilderbrandt Brothers' artwork did not reflect this. Therefore they commissioned a completely new poster by Tom William Chantrell. This rare original design was used mainly in London on the underground a few months before the film's release, and was then replaced by Chantrell's poster.