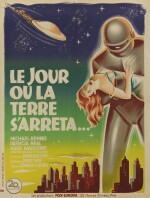 20th Century Fox made this science fiction film in black and white. It was directed by Robert Wise, and stars Michael Rennie, Patricia Neal, Billy Gray, Hugh Marlowe, and Sam Jaffe. The film was based on Harry Bates's 1940 short story 'Farewell to the Master'. The musical score was composed by Bernard Herrmann. The film is about an alien and his eight foot tall robot who land on earth with a message for humans to live peacefully or be destroyed. It is no coincidence that this film was made soon after World War II.

Boris Grinsson has beautifully captured the essence of this 1950s classic sci-fi film.