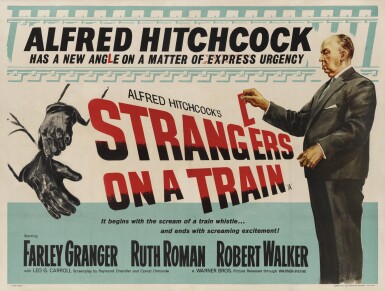 This psychological thriller was directed by Alfred Hitchcock, and based on the 1950 novel by Patricia Highsmith of the same name. It was shot the same year that the book was released, with the film's release the following year. The film stars Farley Granger, Ruth Roman and Robert Walker, and also features the director's daughter Pat Hitchcock.

This poster was designed for a short re-release of the film in the 50s. It would not have been shown in many theatres, and therefore only had a small print run. This poster does not come onto the market very often. The artwork on this poster was unique to the film's re-release. Two different posters were printed, both with almost identical artwork. The difference between the two is where it mentions at the top of the poster Alfred Hitchcock, and the tagline. In this version his name and a different tagline is housed within a train track design, and the other version has a different tagline and no train track design. This is the rarer and more desirable of the two posters.