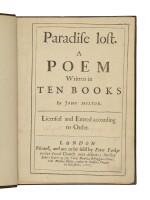 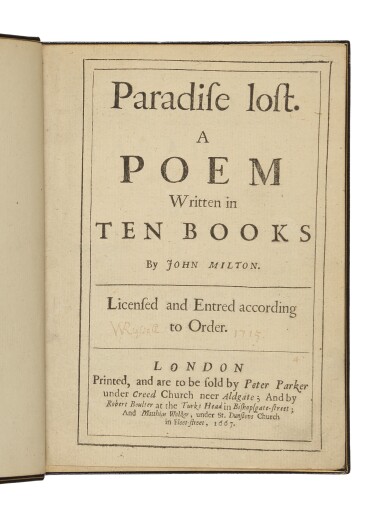 Milton sold his copyright in Paradise Lost to the printer Samuel Simmons in April 1667; Simmons registered his copy with the Stationers' Company on 20 August 1667, which is taken to be virtually the date of publication of the finished edition. In the first issue, there was no preliminary text; only subsequently were two additional quires printed, containing a resetting of the title-page, a note titled "The Printer to the Reader," Milton's "Argument" and defense of the verse, and errata.

For the first issue, the title-page and conjugate blank were printed together with the final half-sheet quire Vv. In the course of printing some 1500 copies, two successive in-press changes were made to the title-page. In the first state the name JOHN MILTON is in italic capitals larger than the word LONDON; in the second state, as here, the name is printed in smaller italic capitals; in the third, Milton's name was reduced to the initials J.M., the words "Written in" were reduced to "IN", and the date was changed from 1667 to 1668. Title-pages in any of these three states together with absence of the "Argument"-errata quires define the first issue, although it may be further supposed that stationers would have tended to sell copies with the 1667 date (states 1-2) earlier than with the 1668 date (state 3).