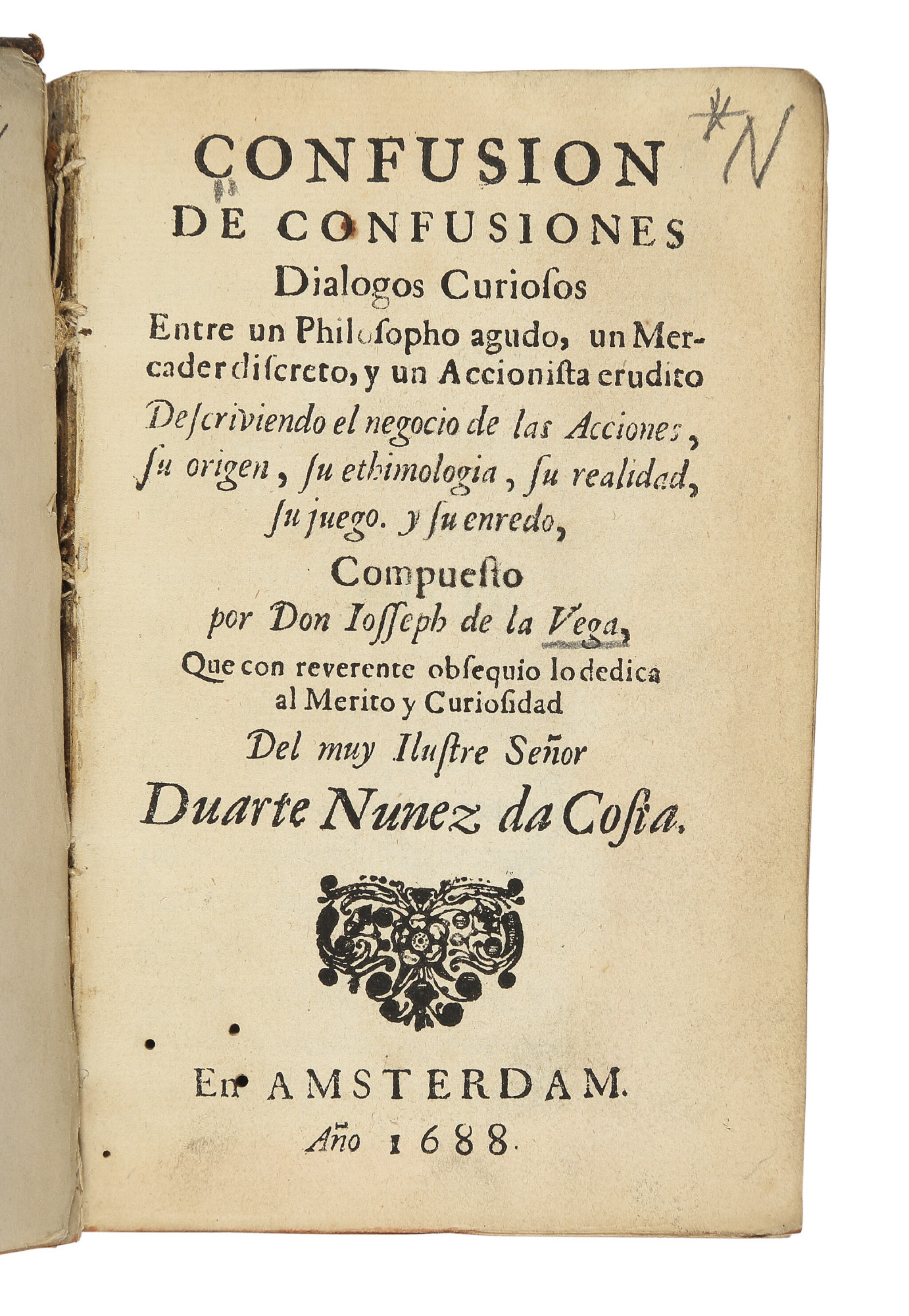 The legendarily rare first edition of the first book to describe a stock exchange. De la Vega’s Confusion de Confusionesprovides a detailed explication of the Amsterdam stock exchange at which he speculated, supposedly losing and winning back his fortune five times. The practices he describes—puts, calls, pools, and manipulations—remain very much in evidence in contemporary exchanges.

Despite its great accuracy and keen insights, Confusion de Confusionesremained little known until the German economist Richard Ehrenberg published an influential essay in the 1892 Jahrbücher für Nationalökonomie und Statistik, “Die Amsterdame Aktienspekulation un 17. Jarhhundert.” The historical significance of the work was further enhanced by translations into German and Dutch in 1919 and 1939, and in 1957 an abridged translation in English by Hermann Kellenbenz published by the Kress Library of Business and Economics brought the text even wider recognition.

Trading and speculation in stocks—as opposed to goods—had begun only in the seventeenth century with the establishment of the Dutch East India Company in 1602. By 1611 Amsterdam merchants had already built an exchange building on the River Amstel. In his preface, Vega cites three motivations for publishing an account of the “confusion” of the still relatively recent stock exchange: for his own enjoyment; to champion the exchange as a fundamentally honest and useful enterprise; and to warn of the deceitful practices that nevertheless flourished there.

The main text is written as a series of dialogues between stock characters such as a philosopher, a merchant, and a shareholder. In the second dialogue appear perhaps the most enduring portion of Vega’s teaching about stock markets, his four rules for speculators explained by the shareholder, here in Kellenbenz’s translation:

“The first principle [in speculation]: Never give anyone the advice to buy or sell shares, because, where perspicacity is weakened, the most benevolent piece of advice can turn out badly.

“The second principle: Take every gain without showing remorse about missed profits, because an eel may escape sooner than you think, It is wise to enjoy that which is possible without hoping for the continuance of a favorable conjuncture and the persistence of good luck.

“The third principle: Profits on the exchange are the treasures of goblins. At one time they may be carbuncle stones, then coals, then diamonds, then flint-stones, then morning dew, then tears.

“The fourth principle: Whoever wishes to win in this game must have patience and money, since the values are so little constant and the rumors so little founded on truth. He who knows how to endure blows without being terrified by the misfortune resembles the lion who answers the thunder with a roar, and is unlike the hind who, stunned by the thunder tries to flee. It is certain that he who does not give up hope will win, and will secure money adequate for the operations that he envisaged at the start. Owing to the vicissitudes, many people make themselves ridiculous because some speculators are guided by dreams, others by prophecies, these by illusions, those by moods, and innumerable men by chimeras.”

Vega was a Sephardic Jew born in Spain about 1650. His family emigrated to the Netherlands, and Vega eventually settled in Amsterdam, then the financial capital of the world, where he lived until his death in 1692. While best known for Confusion de Confusiones, he published many other works—drama, poetry, romances, and philosophical and moral treatises in both Hebrew and Spanish—in addition to establishing himself as a leading merchant and philanthropist. In 2000, the Federation of European Securities Exchanges established the annual De La Vega Prize in his honor; it is given to “young European researchers who distinguish themselves by outstanding research on the securities markets in Europe.”

The 1688 first edition of Confusion de Confusionesprobably survives in fewer than ten copies. Both Kellenbenz and the Sotheby’s catalogue for the only other copy to appear at auction (sold in our London rooms, 26 November 1987, lot 127, and now in a European private collection) claim six copies are extant, but neither provides a census and it is not clear if either was aware of the JTS copy. OCLC/WorldCat produces its own confusion of confusions with a welter of citations of numerous digital, facsimile, and later editions.