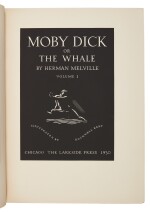 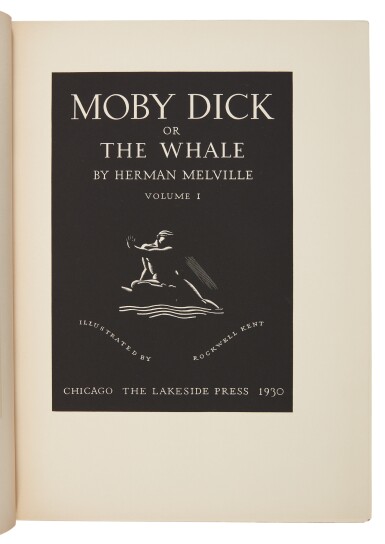 4to. Illustrated by Rockwell Kent. Original silver gilt-stamped black cloth in aluminum slipcase. Usual minor offsetting from illustrations and rubbing to "can" else a very attractive copy.

1 of 1000 copies. In 1926 The Lakeside Press launched their ‘Four American Books’ campaign that would see the publication of four works by American authors and aim to produce illustrated works that would rival the Private Press’ of Europe. Moby Dick is widely celebrated as the greatest result of this campaign. Rockwell Kent saw his illustrations as "literary woodcutting", although his illustrations are not woodcuts, but rather ink and wash. So successful and captivating were Kent’s designs that this edition is credited with finding the novel a wider audience and cementing the status of Moby Dick as an American classic. William Kittredge (Director of Design and Typography at the Press) in a letter to Kent wrote "We will all go jump in the lake if this book is not the greatest illustrated book ever done in America".