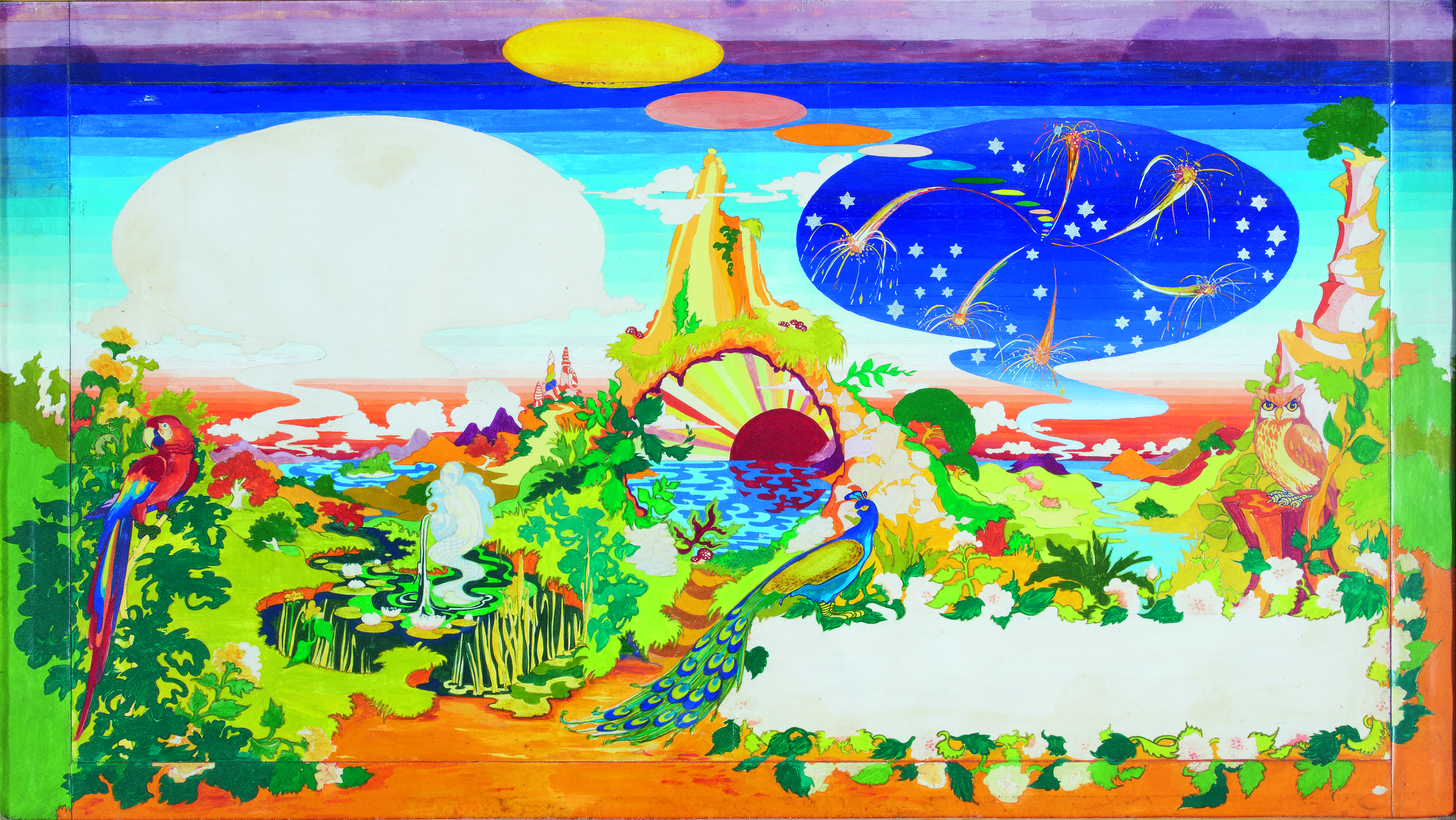 enamelled paints heightened in pen and ink, depicting a coastal dreamscape at sunset with birds in the foreground (owl, parrot, peacock) and a pool with lilies and a fountain shaped as a mermaid, fireworks in the upper right, two white panels (oval in the upper left and rectangular in the lower right) left blank for text, on paper, the sheet extended at all four margins then laid down on card, 407 x 717mm, with a circular sticker depicting a sun and stars on the reverse, [1967], mounted on pine board inscribed and decorated in red fibre tip on the reverse by Ringo Starr ("To Hill | We Love you | Billy S. | and fam. | xxxx | 87-67"), signing as Billy Shears, Ringo's alter ego in Sgt Pepper's Lonely Hearts Club Band), with a decoration of stars and moons, in a decorated gilt frame with psychedelic themes inspired by the landscape labelled "Original Cover Design for the Sgt. Pepper's Album by 'The Fool'", frame 695 x 1050mm, some wear with loss

Sgt Pepper’s Lonely Hearts Club Band is almost certainly the most influential album in pop music history, whether or not one agrees that it contains The Beatles finest music. What set Sgt Pepper apart was its unprecedented ambition as a unified artwork; its use of an underlying concept that holds together its songs, and which is crucially reinforced by the album artwork, of which this piece was created to be part.

Paul McCartney was the driving force behind the concept of The Beatles performing as a fictional band, and artwork was a key part of McCartney’s vision. Much of Sgt Pepper's whimsically nostalgic aesthetic, from the pseudo-military uniforms to the structure of the front cover, can be found in McCartney’s preliminary sketches. From an early stage the album was conceived of as a gatefold (a format first used in Dylan’s 1966 double album Blonde on Blonde), which would give it double the space for artwork compared to a normal LP, and this format was retained even when it became clear that The Beatles had not recorded enough material for a double album. Whilst the husband-and-wife pop art team of Peter Blake and Jann Haworth were called upon to bring substance to McCartney’s ideas for the cover design, the Beatles turned to one of the leading proponents of psychedelic artwork to fill the inner section of the gatefold. The Fool was a Dutch design collective who had been commissioned by Brian Epstein to design programmes for concerts at the Saville Theatre, which he owned, as well as designing work for other bands including Cream and Procul Harum. Marijke Koger Dunham, one of the collective's leading members, has recalled how the commission came about in an article included in the booklet accompanying the 50th Anniversary super Deluxe Box Set Reissue of Sgt. Pepper (2017):

“...The Beatles’ roadie, Mal Evans, brought John and Paul to our studio in St Stephen’s Gardens. They had seen my Saville Theatre programme cover for Hendrix and The Who and were intrigued by the artwork. They blew their minds over the ‘Wonderwall’ Simon [Posthuma] and I had painted n 1966 on an armoire in polychrome psychedelic imagery, as well as others paintings and artwork. Soon they introduced us to George and Ringo […] They invited us to the orchestral session/party for ‘A Day In The Life’ at Abbey Road on 10 February 1967. After that, we were commissioned to work on a concept sketch for the Sgt. Pepper album cover […] The artwork was supposed to be for the inside spread of the gatefold. The lower right rectangular section was to feature The Beatles’ name, the song titles would be overlaid on the upper right ‘fireworks’ oval and a display of photos of them placed on the upper left oval...”

The Fool’s lush, vibrant landscape is a classic example of late-60s psychedelia. It was, however, rejected in favour of a photographic portrait of the band in their coloured tunics by Michael Cooper. The decision not to use The Fool’s design was heavily influenced by Robert Fraser, the art dealer friend of the band who had worked with Paul to develop his visual concepts for the album and had first got Peter Blake involved in the project. The decision was in part about draughtsmanship, but Fraser may also have been concerned that the overtly psychedelic design was too much of a contrast with the upper cover; it provides a very different vision of Pepperland from the saturated colours and faux-Edwardian pastiche with which we are all so familiar. The rejection of the design certainly did not mark a lack of appreciation of The Fool by The Beatles: their wavy red and white pattern was used on the record’s inner sleeve, and they went on to paint pianos, cars, and murals for members of The Beatles as well as the extravagant mural of the exterior of the Apple Boutique.

This design by The Fool was eventually used as part of the artwork for the 50th Anniversary Deluxe reissue of Sergeant Pepper in 2017. This original artwork, with its exceptionally rare signature of Ringo as "Billy Shears", is a unique piece of Beatles history.