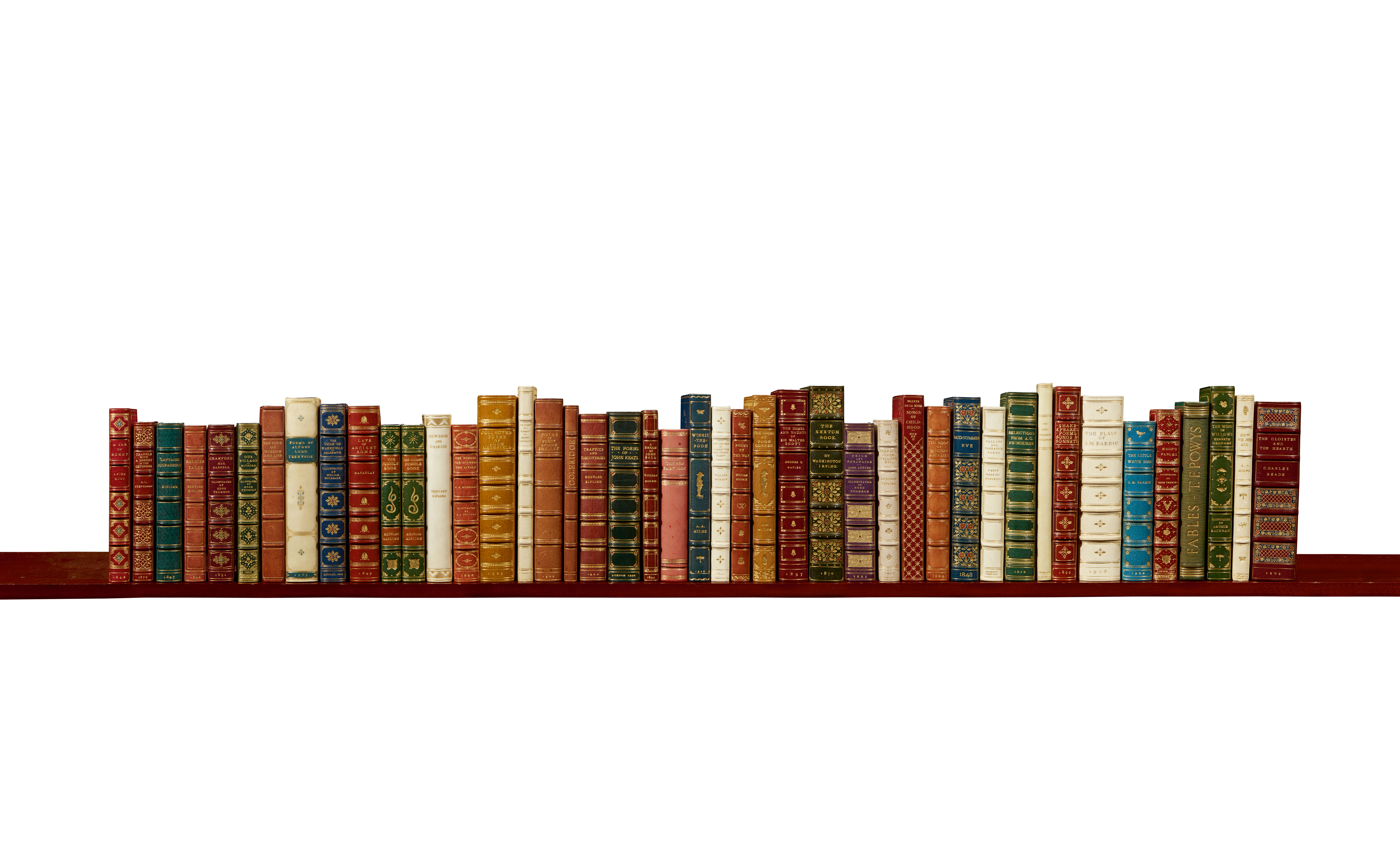 The Florence Maggs Christmas Bindings from Sangorski and Sutcliffe, comprising:

44 volumes, 4to and 8vo, all inscribed, signed and dated by the binders (1 by Sangorski & Sutcliffe, 31 by Sutcliffe, 10 by Stanley Bray), all with name ‘Florence Ada Maggs’ or ‘FAM’ monogram featured in the design, goatskin, morocco, vellum, sealskin, sharkskin or pigskin bindings elaborately gilt, with decorative onlay designs, most feature decorative gilt turn-ins and silk endpapers, many with gilt tooling and jewelled accents, in most cases spine titled and dated in gilt, 39 preserved in slipcases or folding boxes, 18 modern collector's folding boxes with near similar motifs to the bindings

Full list and cataloguing for each individual book available on request.

These spectacular Christmas Bindings unite two of the most important and recognisable names in the twentieth century book trade. These forty four books, each with their own exquisite binding, were gifted year by year by Sangorski & Sutcliffe to Florence Maggs, the wife of Ernest Maggs, who had taken over his father’s firm with his three brothers in 1894. Carefully conserved since then and now offered for sale as a complete collection, these books are not only testament of a lifelong friendship but provide a unique record of the development of London’s greatest bindery. The collection also encompasses over a hundred years of publishing history, including beautifully illustrated editions of Pride and Prejudice and Cranford, first edition copies of the Winnie the Pooh stories, limited edition publications from William Morris’ Kelmscott Press and the Vale Press.

By 1911, Sangorski & Sutcliffe were operating from new premises on Southampton Row. The previous decade had seen them develop strong relationships with many of their customers, but none so close as that with rare booksellers, Maggs Bros. The four Maggs brothers – Benjamin, Henry, Charles and Ernest – were the proprietors of one of London’s most respected booksellers, counting the Royal family amongst their customers. As a mark of their importance to the bindery, Sangorski & Sutcliffe began binding a special Christmas book for the ladies of the Maggs family, a tradition which would continue for the next four decades and survive two World Wars and the great Depression.

The first binding designed for Florence Ada Maggs, Ernest’s wife, was for a copy of Hall's Midsummer Eve, and - like later presentations - it incorporated her name or monogram. Only this first gift bears the signatures of both founding partners beneath the dedication: at the start of July 1912, six months after the first Christmas binding, Francis Sangorski was drowned swimming in the sea at Selsey. He was thirty-six years old. He was buried at Marylebone Cemetery, East Finchley, with the Maggs family in attendance, and his tombstone bore the epitaph ‘Artist Craftsman’. Until 1943, the signature of George Sutcliffe appears on each Christmas book alone.

The influence of Sangorski & Sutcliffe on twentieth century bookbinding cannot be overstated. Working at the heart of the Arts and Crafts movement, their workshop elevated bookbinding from a humble craft to an artistic endeavour in its own right. They formed a company “dedicated to only the finest work and the highest standards”. Their bindings remain some of the most beautiful and coveted books in the world, found in the most preeminent collections and preserved as treasures in numerous institutions. This collection, made for Britain’s oldest family of antiquarian booksellers, stands as testament to the development of the most important hand bindery of its era. A unique piece of the firm’s history, “by any standard, then or now, these extravagant, glittering examples of the book-binders craft were the products of a workshop at the very height of its creative powers.” (Rob Shepherd, The Cinderella of the Arts, 2007).