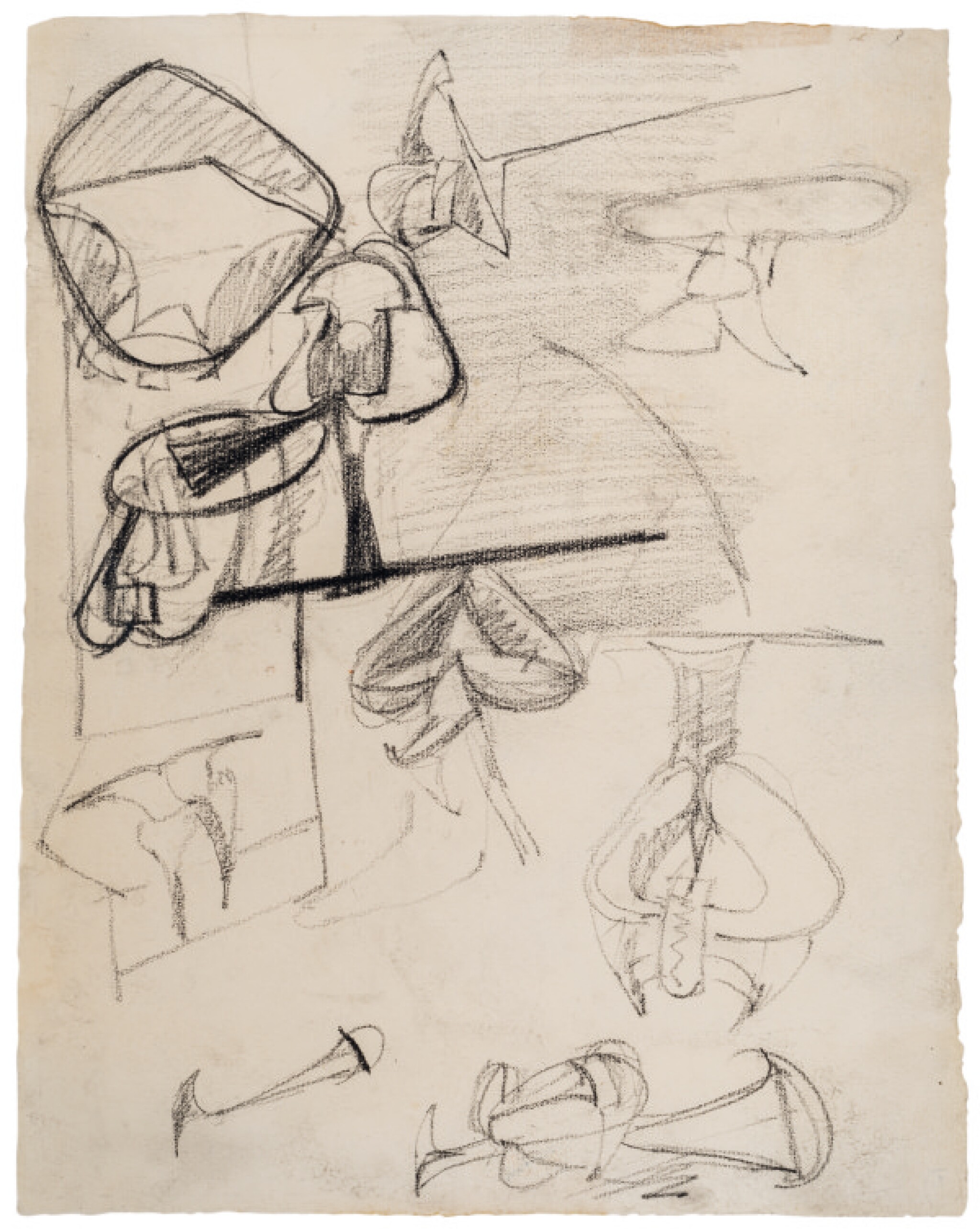 Executed circa 1940s, this work is catalogued in the Arshile Gorky Foundation Archives as number D1520.

﻿Please note that this work will be exhibited at Allan Stone Projects. Purchased items will be available for collection at Crozier Fine Arts, 1 Star Ledger Plaza, Newark, NJ as of Thursday, December 13th.

Please note that this work has not been examined out of its frame. This work is in very good condition overall. The work appears to be hinged intermittently along the reverse to the backing board. The edges are deckled. There is minor yellowing to the sheet. There is smudging to the medium throughout, most likely due to the artist's working method. There tape on the reverse of the sheet is slightly visible at the upper edge. There is minor undulation the sheet. Framed under Plexiglas.

Of the many abstract painters exhibited and collected by Allan Stone, few are more closely associated with his program and expertise than Abstract Expressionist Arshile Gorky. Allan Stone mounted numerous comprehensive exhibitions of Gorky's work, and many of the most revered Gorky paintings and works on paper in prestigious collections today passed through Allan Stone's hands.

Though his life was tragically short, Gorky is recognized as an essential bridge between European Surrealism and American Abstract Expression. Gorky is most recognizable in mature works that employ the Surrealist technique of “automatic drawing,” where pen or pencil marks are made without preconception and the creations are interpreted as subconscious thought. His innovative style combined childhood memories – the gardens, orchards and wheat fields – with direct observations from his American life. The resultant works are both specific and allusive, generating symbols that are both stirring and relatable, but unable to be definitively identified. Many artists, particularly those of the 1950s New York School, have credited Gorky as a major source of inspiration.

Gorky was first exhibited at the Museum of Modern Art in 1930, with fellow artists under thirty-five. Countless other exhibitions ensued, including a retrospective of drawings at the Whitney Museum of American Art and the Menil Collection in Houston, in 2003, and another in 2009 at the Philadelphia Museum of Art, traveling to the Tate Modern in London, and Museum of Contemporary Art in Los Angeles. Gorky’s work is in numerous museum collections, including the Solomon R. Guggenheim Museum, Louisiana Museum of Modern Art, Humlebaek, Denmark, and Centre Georges Pompidou, Paris. In a decade characterized by personal tragedy, Gorky took his own life in Sherman, Connecticut, in 1948. The Arshile Gorky Foundation was established by the artist’s family in 2005, with a mission to further develop and shape his lasting influence.