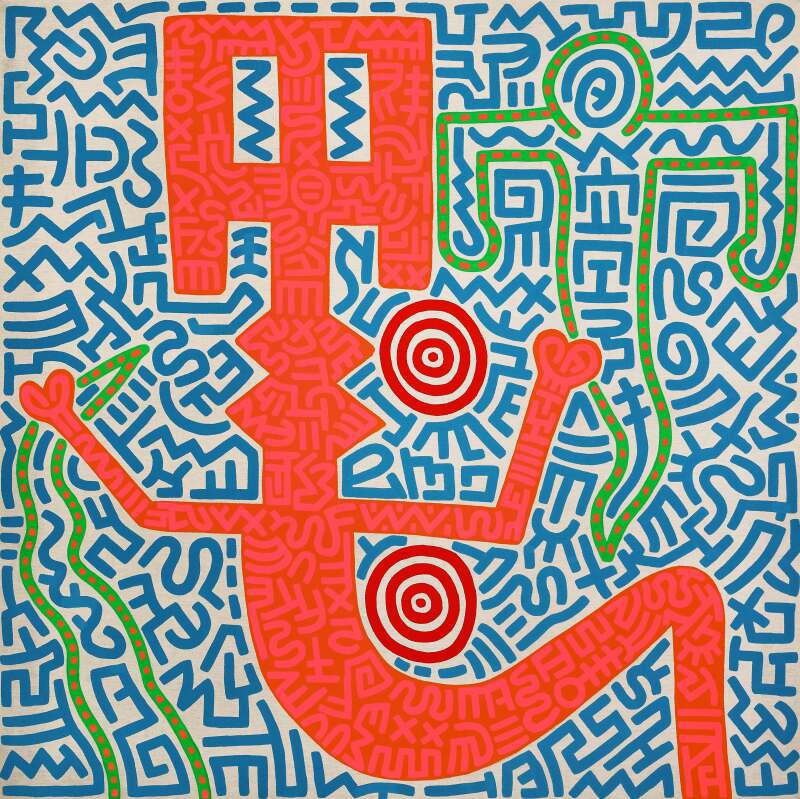 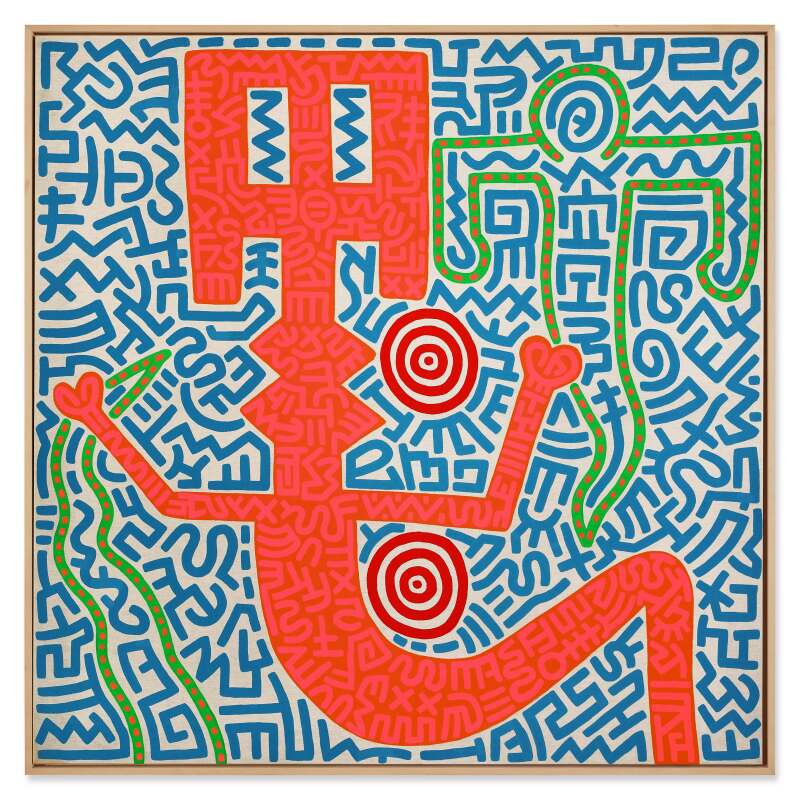 Untitled (Aztec Snake Goddess) depicts Keith Haring’s interpretation of an Aztec deity through his unmistakable, stylized graphic line, his fluorescent neon palette, and two-dimensional forms. While highly abstracted, the striking figure painted in Day-Glo orange with exuberant pink ornamentation evokes the image of an Aztec goddess such as Cōātlīcue, a divine, maternal being. Aztec artifacts, such as the Cōātlīcue statue in the National Museum of Anthropology in Mexico City, represent the goddess with two serpents facing one another to form her head, two claw-like appendages and a skirt of writhing snakes—a foreboding image of immortal power. Haring’s re-imagination of the figure surrounded by his classic, graphic marks and the green outlines of a ghostly form and a reptilian tail illustrate the artist’s imagined vision of mythic creatures and ancestral legends. Haring’s dynamic line and imagery, while very much his own, is not uninformed and unintentional in its consideration of ancient cultures’ use of hieratic pictorial planes and symbolism such as the concentric circle, which was often associated with cosmological representations and the cyclical nature of time.

Snakes, circles, ghosts, masks and countless other primitive motifs were characters Haring consistently reprised in his inventive compositions throughout his career. Untitled (Aztec Snake Goddess) is Haring’s homage to the eternal artistic forms conceived early in human history that endured in their powerful symbolism through the course of time. Haring painted Untitled (Aztec Snake Goddess) in April 1984 as he was plunging into international fame. The work was included in Haring’s first solo exhibition in Germany at Galerie Paul Maenz in Cologne. In typical Haring fashion, the opening of the exhibition on May 3, 1984 was celebrated with a debaucherous evening and a performative work involving his painting the body of a nude model. On the model’s back, Haring painted a ghostly figure with bat wings not dissimilar to the cartoonish spirit in Untitled (Aztec Snake Goddess). The present work also marked a period of Haring’s experimentation with new media as he traveled the globe. Later in 1984, his burgeoning exhibition schedule brought him to Milan, where he continued to make more paintings on muslin. In his journals, Haring recounted his process as he created the body of work to be included in his 1984 show in Milan:

“These paintings were some of my first works with acrylic paint on a stretched muslin. I chose to begin painting with acrylic because of the wide range of color I had been ignoring in my previous work on vinyl. I also just wanted to prove that I could paint, or do anything, if I wanted to. I chose muslin because the surface was smoother and more delicate than canvas” (the artist on June 13, 1984 in: Keith Haring Journals, New York, 1996, p. 116).

Untitled (Aztec Snake Goddess) is exemplary of the early stages of this period in Haring’s oeuvre. While he quickly became and continues to be an icon of popular culture and is best known for his seamless integration of universal symbolism into art, Haring truly pushed himself as a formal artist. He took his process and the act of creation seriously and was highly aware of the role and responsibility he had in a cultural moment of turmoil and societal transformation. In hindsight, Haring accomplished all that he sought to emulate in the symbolism established by humanity throughout time: his work transcended the moment he lived and created in and redefined the lexicon of Pop Art.