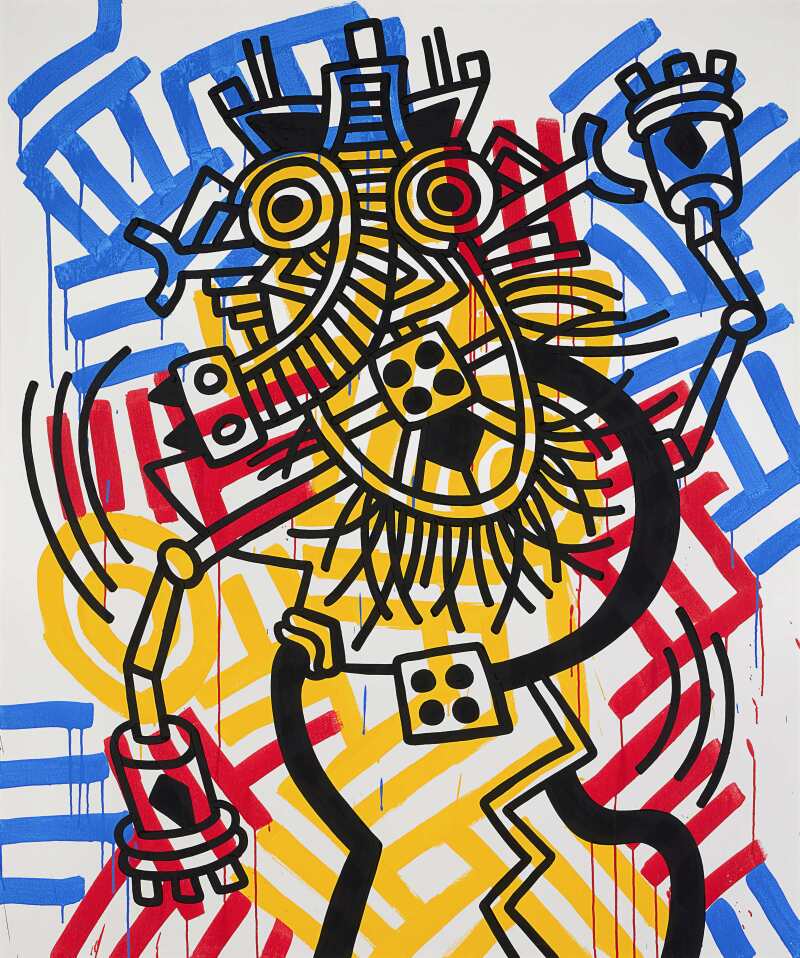 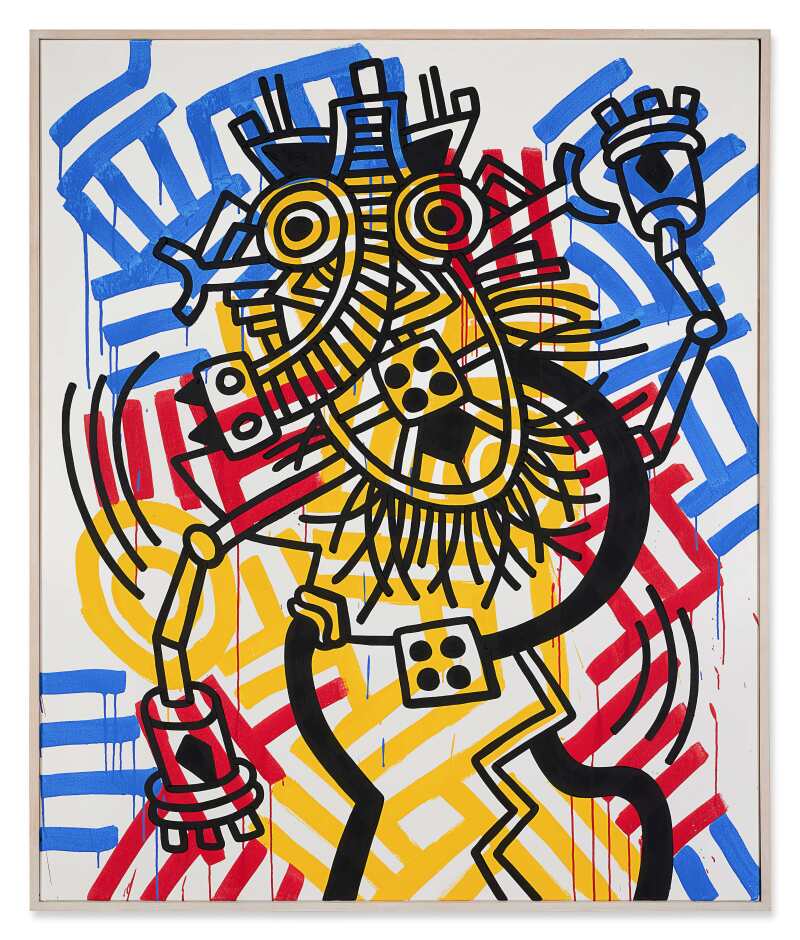 This work is accompanied by a certificate of authenticity issued by the Authentication Committee of the Estate of Keith Haring.

Red, Yellow, Blue #24 belongs to a series of bold, dynamic, and historically charged works executed by Keith Haring in 1987, when the artist was at the height of his fame and artistic mastery. This series of large-scale metal masks and paintings in a restricted palette of black and primary colors pays homage to the Modernist tradition by referencing tribal and folk art pioneered by such masters as Picasso, Braque, and Brancusi. The writhing, vibrating figure at the center of the present work features a hypnotic African-inspired mask adjoining abstracted and robotic limbs, rendered in bold black lines imposed over a background of primary-colored geometric patterns, not unlike the multicolored cross-hatching of Jasper Johns. Haring’s confident hand paints strong, self-assured strokes, eschewing a pre-meditated schematic plan for spontaneous genius; never erasing or reworking, his virtuosic gestural ingenuity flows directly through his brush and onto the canvas. Unmistakably identifiable by the frenetic, exuberant brushwork and expressive drips throughout the composition, the present work communicates Haring's infectious energy and joy. Rendered in the artist's characteristic graphic lines, simplified forms, and whimsical dynamism, Red, Yellow, Blue #24 epitomizes the artist’s signature pictorial practice of assimilating street art and graffiti with highbrow culture and canonical reference.

An important and engaging work from the latter part of Haring’s tragically curtailed life, Red, Yellow, Blue #24 is an exuberant demonstration of the way that his style evolved, never fully abandoning the spontaneity of the subway drawings, but towards a more established conversation and pointed deconstruction of art historical tradition. Drawing upon the weighty iconography of the classical canon, Haring assimilates features from a variety of modern masters into his own unique Pop style. From Picasso he takes an experimentation with perspective and Cubist sensibility; from Pollock, the spontaneity of chance that can transform a painting in its creation; from Legér, the colors from his Contraste de formes series and the clean black lines that shape his figures; and from Matisse, the blocks of color that are enhanced by structure and juxtaposition. George Condo reflected on the way they inspired each other and engaged with Modern masters in stating:

"[Keith] was finding a new direction in painting and it was interesting for him to come to Paris. He started thinking a little bit about Calder-like, Legér-like, big color areas that he'd draw over, leaving white space around the forms...When I started looking a lot at Picasso, and doing these Picasso-esque paintings, he became interested in that kind of thing too. He did a few with the quality of the Cubist period, but then brought in his graffiti-like approach" (George Condo quoted in Jeffrey Deitch, Suzanne Geiss & Julia Gruen, Keith Haring, New York, 2008, p. 428).

Red, Yellow, Blue #24 incorporates all of these elements and seamlessly harmonizes them into Haring’s quintessential visual vocabulary to produce a masterful expression of an artist at the peak of his career.