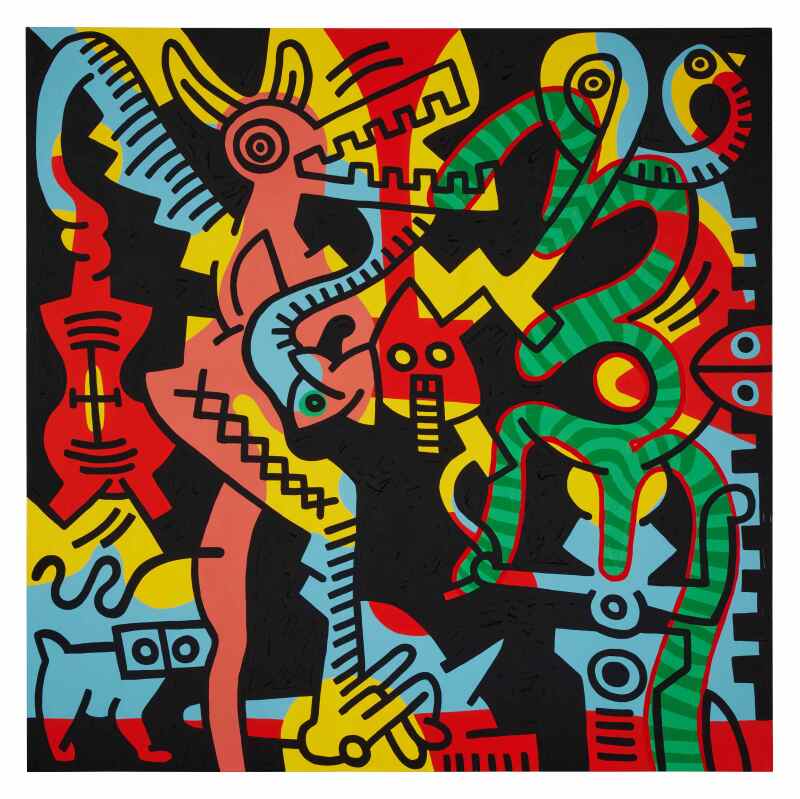 Collection of Francisca Mateu and Salvador Pedreno Clerier, Barcelona (acquired from the above in 1991)

Private Collection, Hong Kong (acquired from the above)

This work is accompanied by a certificate of authenticity issued by the Authentication Committee of the Estate of Keith Haring.

Keith Haring was acutely wary of the rapid takeover of technology and the cultural onslaught of the computer age. The 80s were the product of the Pop culture zeitgeist: just as the Pop icons of the previous decades had done, Haring and his contemporaries reflected the visual ethos of the moment. Television, street culture and the globalization of media through the lenses of war, the AIDS pandemic and social revolution were the ever-present, raw inspiration for Haring’s signs and symbols. A student of art history and philosophy and active in the critical deconstruction of all art he encountered, Haring wrestled with the concept of Formalism and the role of the artist in relation to the ultimate consumers of art, particularly of his art. He consistently returned to the conviction that above all, the effect of a work of art should be measured in the sublime experience of the piece itself.

From a conflicting sense of fear and awe of the commodification of communication, Haring developed a reverence for the universal language of humankind—particularly the collective symbolism of global cultures since the beginning of human history, which manifested in his own artistic iconography. He wrote: “In 1982, with telephones and radio, computers and airplanes, world news and video tape, satellites and automobiles, human beings are still frighteningly similar to human beings 2,000 years ago…Drawing is still basically the same as it has been since Prehistoric times. It brings together man and the world. It lives through magic” (the artist on March 18, 1982 in: Keith Haring Journals, New York, 1996, p. 102). Haring viewed art as a language that transcended time—he frequently revisited and repeated the idea that mankind had created art since the beginning of human history and that while the evolution of technology would certainly transform the forms and methodologies of art, its creation and the translation of the human imagination would remain a constant. Haring’s use of the ancient pictographic symbols and imagery of varied cultures, including those of the Aztecs and other Mesoamerican civilizations, ancient Egyptians, and Aboriginal peoples, was his exaltation of their symbols to the purest form of art. To him, their images represented the infallible resilience of art as a mode of ubiquitous human communication and relation. Re-imaging ancient iconography was Haring’s way of honoring their “magic.”

In 1989, Keith Haring's life had changed with his AIDS diagnosis the year prior and the loss of several close friends in previous years, including the deaths of Andy Warhol and Keith's former lover Juan Dubose in 1987, Jean-Michel Basquiat in 1988, and several others within 1987 and 1988, as well. The death of Juan Dubose made the inevitable graveness of Haring's condition an unavoidable reality. It spurred him to throw himself into his work to the fullest extent to do as much as he could with what little time he had left. Haring continued to travel extensively in the final year of his life and one month following the completion of Mom in October 1989, he brought his parents with him to Europe for the first time to be with him as he was honored by the Principality of Monaco for the completion of a mural in a Monegasque hospital. Haring's assistant Julia Gruen recounted "Joan and Allen were totally thrilled, not only at the prospect of being abroad with their very famous and much admired son, but because a very special honor would be bestowed upon him..." (Julia Gruen quoted in: John Gruen, Keith Haring: The Authorized Biography, New York, 1991, p. 211). Learning of Haring's AIDS diagnosis and prognosis was undoubtedly devastating to his parents, who were proud of all that their son had accomplished in his illustrious career. Haring's mortality, the unavoidable finality of his inability to continue creating, the loss of his closest companions and the imposition of the unknown beyond life likely led him to hold his family dearest in the final months of his life. The weaving lettering of "Mom" through Haring's classic iconography and vibrant color palette reveals a dedication and the heartwarming introspective personal connection Haring sought as he faced his final months of artistic productivity.