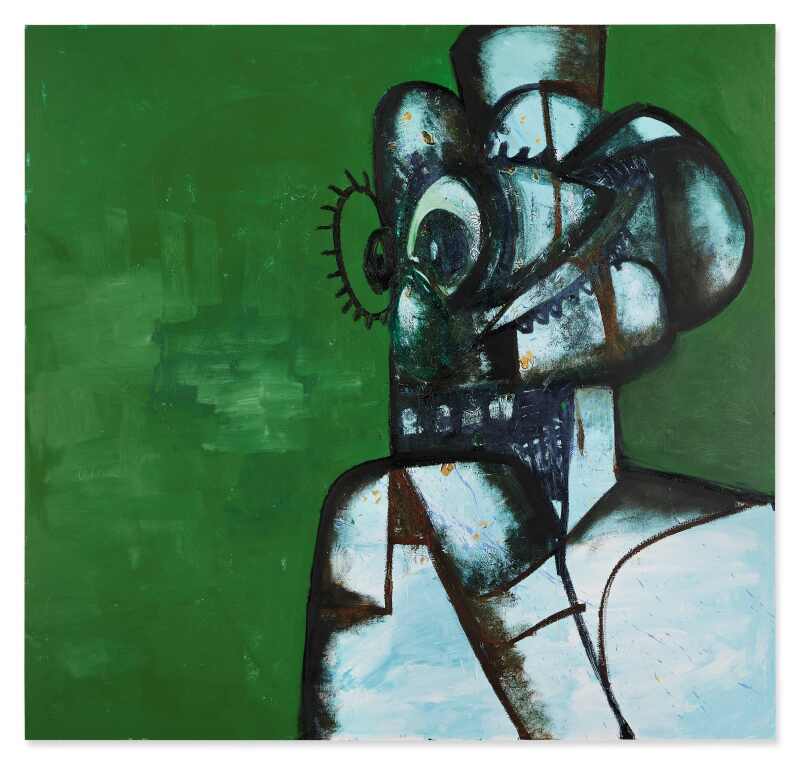 oil and oilstick on canvas

oil and oilstick on canvas

Drawing from a multitude of sources, from the Old Masters to the Modernists, George Condo mines the breadth of art history, re-appropriating and re-contextualizing the works of others through the lens of his own unique style. Straddling the line between comedy and despair, the grotesque and the beautiful, Condo's rich pictorial creations have made him one of the most inventive and highly regarded artists of his generation. In the late 1990s, Condo created a cast of cartooned-characters based off of commonplace professions and pop-culture imagery. Although titled The Gardener,the character before us is not a cartooned member of society, but rather a cubistic rendering of the inner-mind. Drawing from his own body of work, The Gardner is named after a common profession, yet apart from the use of the color green, there are no inclinations or suggestions of the profession at all. The Gardener painted in 2019 epitomizes Condo’s mature style. Within the large frightened eyes and grimacing teeth, we feel the psychological drama of the struggle between daily societal expectations and internal anxieties.

The present work is the quintessential expression of the groundbreaking figurative style which defines Condo’s renowned later works in its fluidity of line, precise use of color and exacting composition. It is a remarkable return to the oil medium from the artist’s celebrated Drawing Paintings. Unlike the portraits from the 2000s, where grotesque and highly stylized figures emerged from the darkness, in his Drawing Paintings Condo creates a new cubistic and linear language. The present work showcases this continuation of the form in oil featuring a cubistic figure, yet unlike the Drawing Paintings the figure is set against a monochromatic painterly applied background. Despite Condo’s departure from the Imaginary Portrait series to the Drawing Painting series and return to oil medium; figuration, the exploration of humanity and the human psyche remain core tenets of his work. Condo redefines and reimagines the traditions or portraiture shifting the central focus of the genre.

Through his attempt to trace the psyche of his sitter, Condo breaks the conceit of portrait painting as a whole, eliminating the illusion that drives it. As the artist has stated, “the affected part of people is the interesting side to me. It’s the real side of them that’s boring”, and there can be little doubt that portraiture as a whole is an affectation (George Condo in conversation with Anney Bonney in: BOMB 40, 1992, online). The portrait that emerges from an artist’s studio is propagandistic – it conveys the reality that the sitter wants to transmit. However, through Condo’s attempts to trace psychology, rather than appearance, he subverts this aim, denying his sitters the ability to curate their own image.