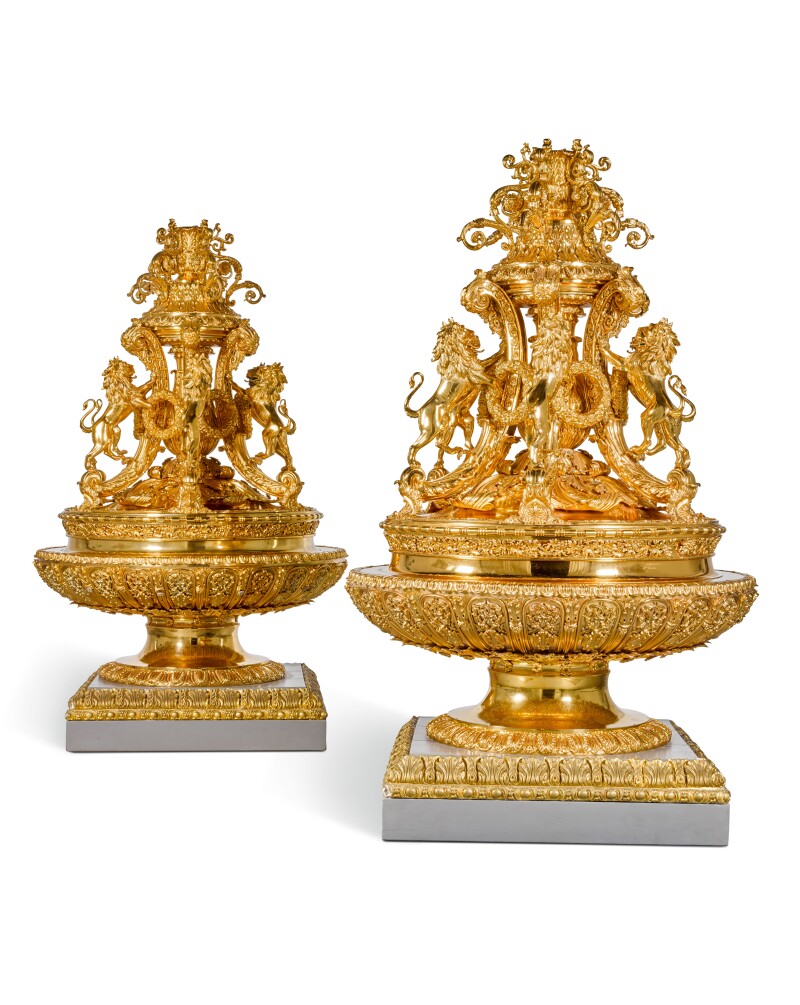 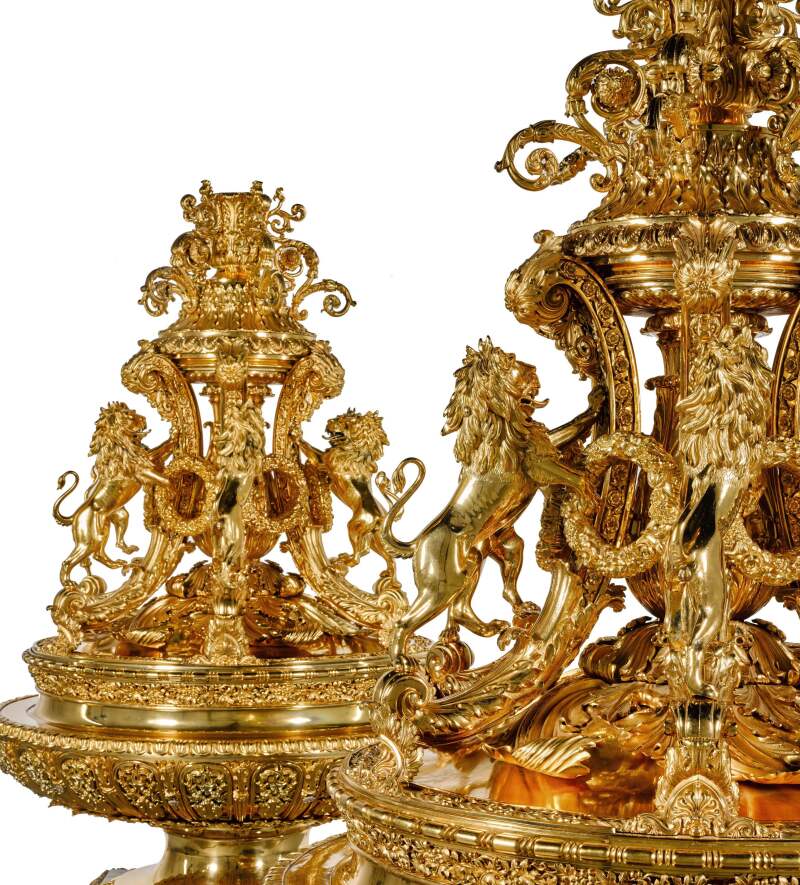 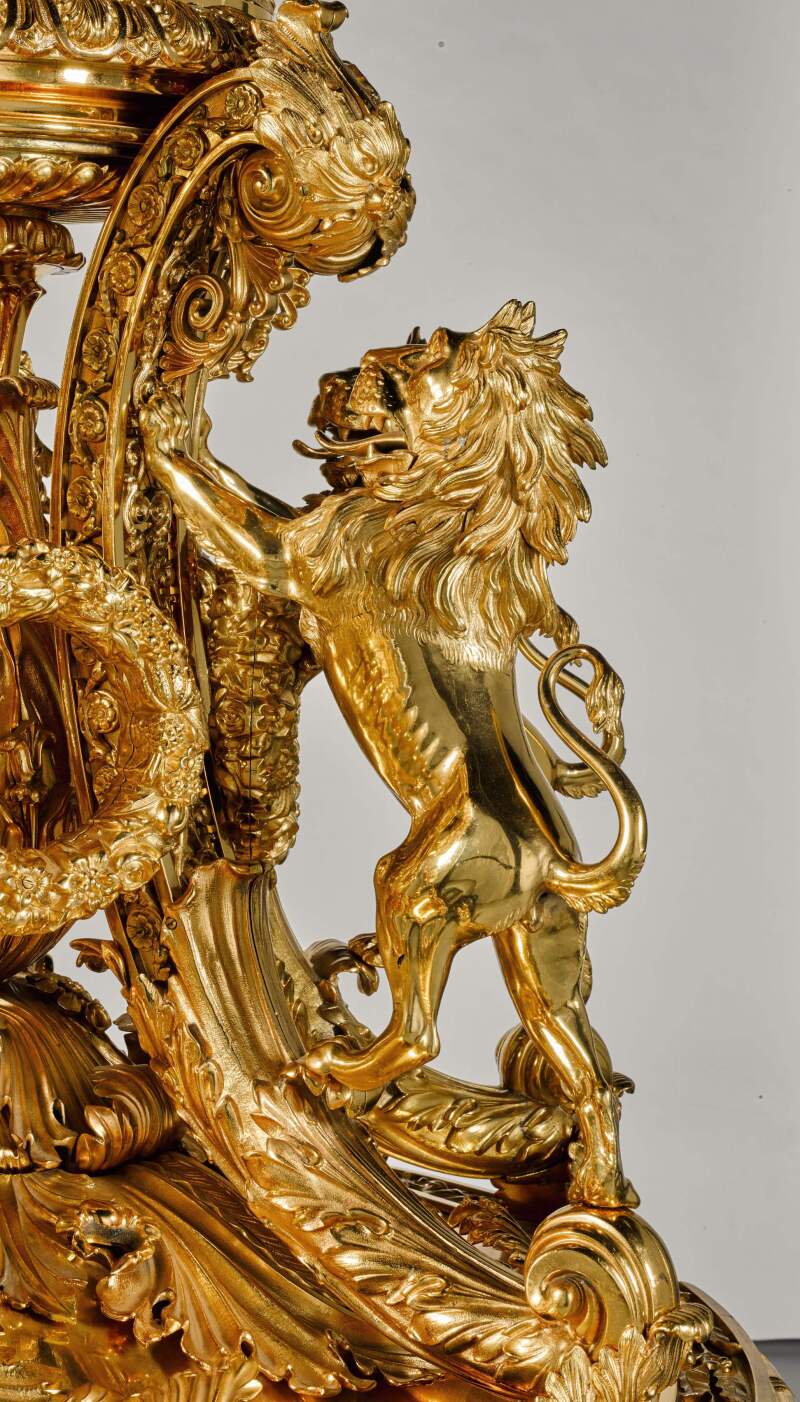 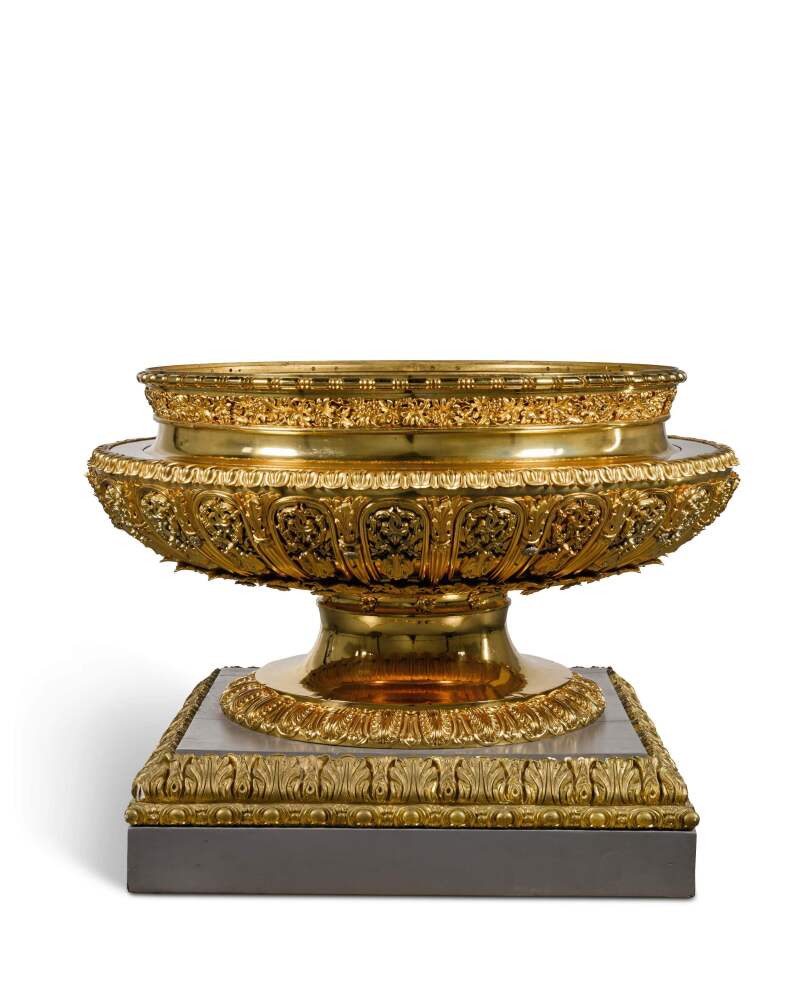 A pair of George IV monumental gilt-lacquered-brass vase ornaments, circa 1823

supplied by William Collins to the 3rd Duke of Northumberland

reconfigured from their original form in the 20th century, the bases of squat campana form cast with flowerheads and foliage and formerly cisterns or jardinières, the upper sections with six rampant lions, scrolls and wreaths and formerly central sections from lamp standards

These extraordinary gilt-lacquered-brass vase ornaments offer a fascinating insight into one of the most important commissions of the 19th century; that of ‘lamp manufacturer’ William Collins for the 3rd Duke and Duchess of Northumberland for Northumberland House, one of the greatest private palaces in London.

Collins is recorded in 1822 at 227 The Strand, near Temple Bar, London, describing himself as `Glass manufacturer to His Majesty and their Royal Highnesses The Duke of Sussex and Princess Elizabeth' and later as `Glass enameller, lamp manufacturer to the Queen and Royal Family'. Collins was undoubtedly one of the most ambitious chandelier and lamp makers of the early 19th century and aside from the works supplied to the Royal family, the Northumberland commission must surely rank as Collins’ most extensive and important body of work. The commission spanned seventeen years - from 1822 to 1839 - and totalled a staggering £17,640 19s 2d. The majority of Collins’ work was for the recently renovated Northumberland House which originally stood on The Strand over-looking the Thames. By 1817, the 3rd Duke embarked on an extensive remodelling of the South Front employing architect Thomas Cundy to enlarge it, change its fenestration and create a marble Grand Stair Case to the interior which lead to three large and refurbished Drawing Rooms the cost of which exceeded £160,000. Furniture and furnishings were supplied by Morel and Hughes, two of the most fashionable cabinet makers favoured by George IV.

Understanding the form of the present vase ornaments raises an intriguing question. In their current state, they are purely decorative objects, however, they would have certainly formed part of Collins’ extensive lighting scheme at Northumberland House. But in what manner? In total, there are four vase ornaments of this form in existence. The present pair, each bearing six rampant Percy lions and a further two, one with four lions, the other with five (sold Sotheby’s New York, Property from the Collections of Lily & Edmond J. Safra, Volume IV, 19 October 2011, lot 739). The interior of the bowl of the five-lion vase ornament is inscribed MANUFACTURED by JOHNSTON BROOKES & Co. 32 New Street Square FOR Wm. COLLINS 227 STRAND 1823 which allows us to accurately date the present pair (see Christie's London, 17 November 1988, lot 102).

A detailed drawing pertaining to the upper sections of the present lot, executed by the engineering firm Drake & Gorham and dating to 1900, can be found in the in the Northumberland Archive and casts light on one school of thought. The drawing depicts a monumental, freestanding torchère of identical form to the upper section of present lot save the absence of laurel-wreaths. An accompanying report explains the drawing is of one of ‘four massive standards with circular bases 3’ 0” diameter, consisting of: - Two six-way lions [the present lot] One five-way lion One four-way lion’

The drawing is particularly interesting as it shows the ‘standard bases’ surmounted by enormous ‘thirty-one arm' candelabrum. Tantalisingly, the report goes on to explain the metal-work for fixing the arms in place could not be found, and therefore the drawing cannot be relied on to explain the original form no matter how compelling the overall design.

An alternative and long held view is that the vase ornaments incorporate elements of four ‘superb chandeliers in Grecian metal’ supplied by Collins in 1823 for the Drawing Room, Saloon, Anti Room and Grand Staircase in Northumberland House, each of which is listed in the firm’s account held in the Northumberland Archive (U.111.8d). An 1851 engraving of Cundy’s Grand Staircase from Illustrated London News depicts one of the enormous chandeliers in situ. Clearly some elements of the present lot – such as the rampant lions - correlate with the design of the chandelier. What is certain is that for much of their lives the vase ornaments did not exist in their current form. The lower sections are illustrated in two watercolours of the Glass Drawing Room and the Ballroom executed in circa 1870, apparently being used as enormous ornamental jardinières or coolers and supported on their current plinth bases. It seems likely therefore that the upper sections where dismantled between 1851 - as they do not feature in the Illustrated London News views of the Ballroom - and circa 1870. Northumberland House was subsequently demolished in 1874 when the lower sections were presumably moved to the Entrance Hall at Syon House. There they remained, together with the ‘standard bases’ which were kept in storage at the Riding School at Syon until they were examined by the aforementioned Drake & Gorham in 1900. Although the reason for their dismantling remains unclear, in their current form, these vase ornaments provide a fascinating insight into the exceptional quality and considerable scale of Collins’ Northumberland House commission.