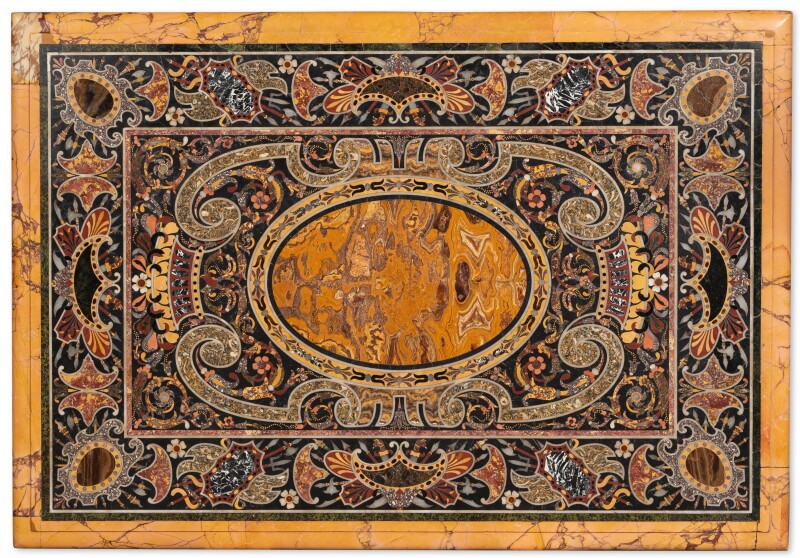 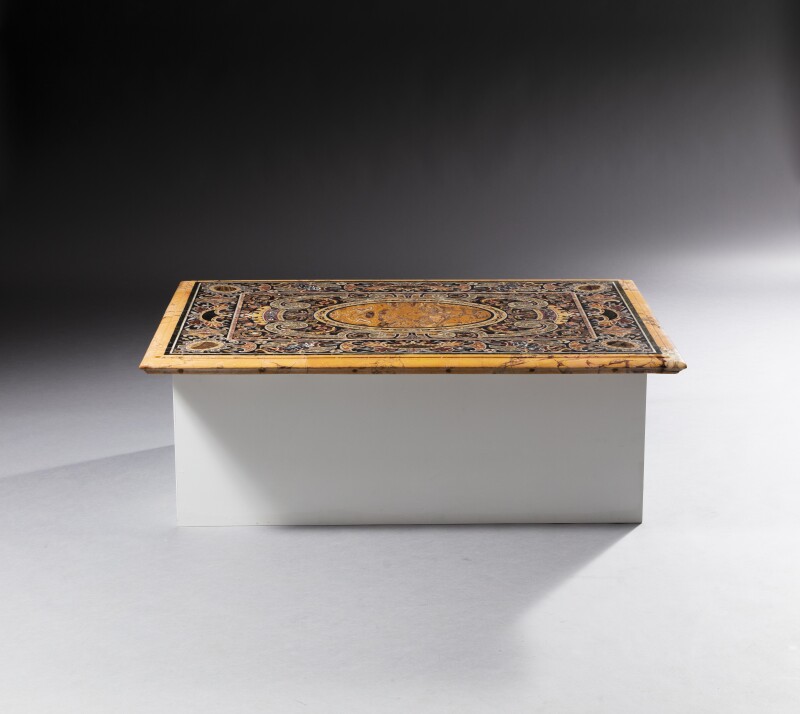 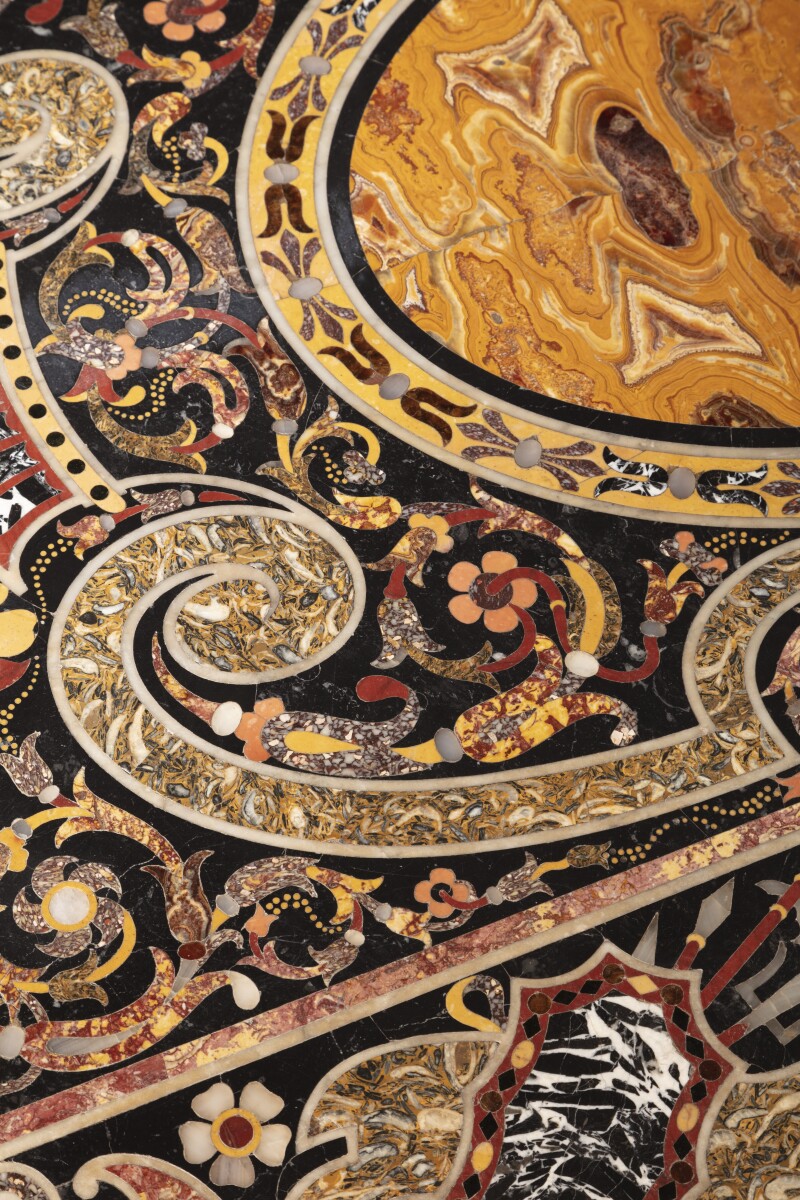 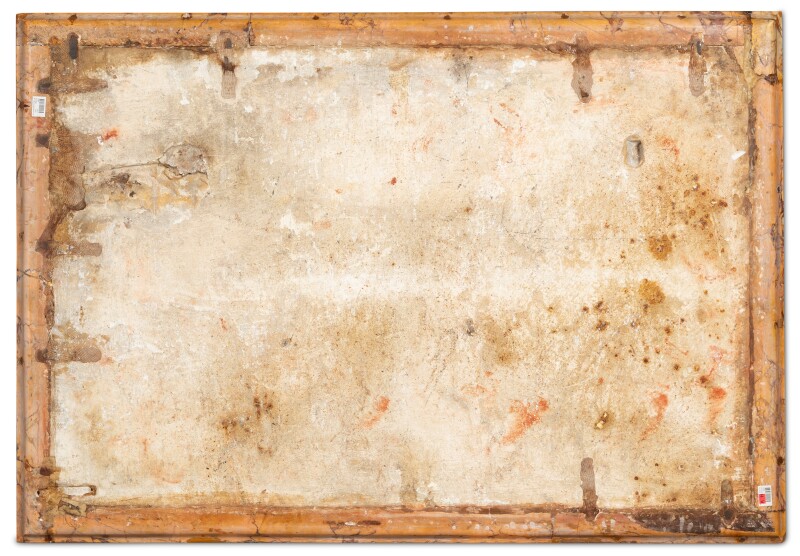 on a black ground, the central oval of alabastro fiorito on a border of husks on a giallo ground and within a strapwork cartouche of lumachella orientale with floral basket ends, the ground with multi-marble scrolling and interlaced floral foliage, the external border of giallo antico with pietra nefritica band and inner border centered to each side by a military trophy arrangement within a pelta shield of breccia quintilina, the weapons with blades of translucent alabaster, and flanked by pelta shields of brocatello, the longer sides with further angled cartouche shield trophy arrangements of bianco e nero antico and lumachella, each corner with a shield cartouche of alabastra a tartaruga and semesanto

Located in Paris. Please enquire to arrange a viewing.

A tour-de-force of marble inlay, with an exquisite choice of antique marbles, this extraordinary table is an exceptional example of the Roman technique of commesso, and can be associated to Pietro Carli, one of the very few names known of artists working in this technique in the turn of the 16th century.

Inlaid marble tops are at the pinnacle of Roman Renaissance Decorative Arts and were considered as such at the time, and certainly commissioned by the most preeminent arts patrons. The Eternal City promoted archaeological discoveries and excavations amidst the quest for rare and beautiful stones and marbles from southern Italy, Greece, Africa and Asia Minor, which once embellished the majestic private and public buildings and temples of Imperial Rome. With columns and fragments of every kind of marble and coloured stone found deposited everywhere in the city, Renaissance artisans would collect these, cut them accordingly and use them to adorn churches, palaces and furniture, establishing in this way a much-pursued material link between the newly created art and architecture and the Antiquity.

Chronologically it has proved difficult to establish a clear timeline for the production of Renaissance Roman inlaid marble table tops, but the dating this table can be placed in the last two decades of the 16th century with some certainty.

A table in All Souls College, Oxford with a design extremely close to the present lot is signed ‘M.PIETRO CARLI FIO[RENTINO] FECIT’ to the underside of border, which seems to be unique in the Roman production, and an attribution of the table top here on offer to Pietro Carli is quite likely. Certainly a Florentine working in Rome, Carli, according to Jervis and Dodd (p.52) might have been related to Bartolomeo Carli, treasurer of the Roman Università dei Marmorari in 1598. The All Souls table top was acquired by the prolific collectors Alfred or James Morrison for Fonthill, and later sold at auction in 1936.

Further to this rare attribution to a known maker, the design of the present table is also close to a drawing found in an album compiled by the Florentine architect and sculptor Fra Giovanni Vincenzo Casale (1539-1593). This album comprises several designs for marble inlaid tops, including some of his own. One design for a table corner, shows the unusual feature of the strapwork cartouche surrounding the central oval, almost identical corner cartouche as well as the pelta shield arrangements which are also similar to those in our piece.

Casale appears to have been in Rome at the end of the 1560’s and early 1570’s and moved amongst the city’s erudite circles and worked for Cardinal Alessandro Farnese, who commissioned the famous Farnese table at the Metropolitan Museum, and might have known other artists working with marbles such as Jean Ménard and Giovanni Antonio Dosi. He moved to Naples – where Dosio and Ménard at some point were also active – and then Spain and Portugal, where he died.

Roman tables of this design complexity and high-quality selection of marbles are extremely rare and the table here on offer belongs to a small, exceptional, group, with military trophies and scrolling foliage as ornamentation, and which are now mostly in institutional collections.

The Don Rodrigo Calderon table (Prado Museum, Madrid, O488) is the most celebrated table top of these although the little known table at the Italian Embassy in London, proceeding from Palazzo Barberini is of larger size and of the same quality, and possibly more visually striking (see Tavela and Sancho-Arroyo, nr. 12, pp.136-139). Together with the table at the Museo Nacional de Artes Decorativas, Madrid, (acquired by the Spanish State from Sotheby’s New York, 5 November 1998, lot 393 ($2,752,500)) these are the largest and should originate from the same workshop. A further comparable example of this group is at the Museu Nacional de Arte Antiga, Lisbon (Inv. 1301 Mov).