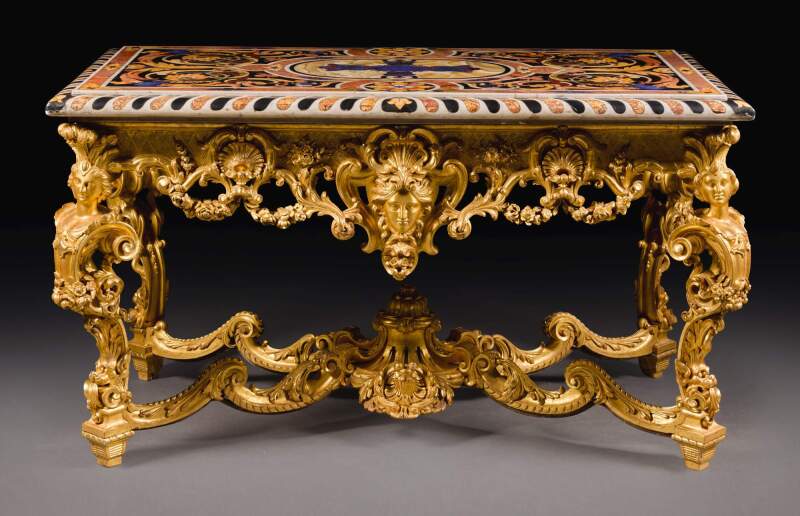 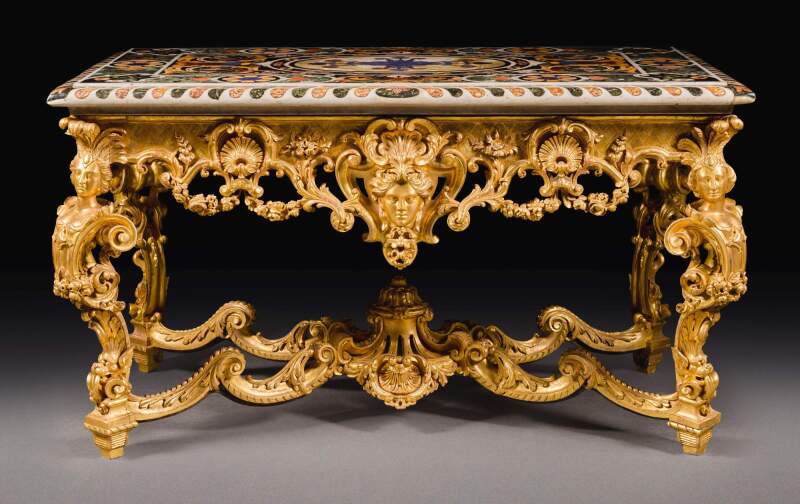 Property located in London. Please enquire to arrange a viewing.

By the early 17th century, the popularity of polychrome inlaid-marble decoration had spread from Florence and Rome to Naples, the largest and most important city in South Italy. Naples’ position as one of the centres for pietre dure further developed in 1738 when Carlos VII of Bourbon, King of Naples (later King Carlos III of Spain) established the Real Laboratorio delle Pietre Dure. Neapolitan pietre dure found in local churches offered highly dramatic, innovative, colourful and bold designs, often covering entire pavements and walls. These impressive table tops transpose this same striking language to a secular function and are one of the best examples of their kind.

These exceptional matched pair of tables, previously owned by Arthur Ronald Nall-Cain, the 2nd Lord Brocket (1906-1967) assert their individuality by offering us different surface designs. Although influenced in design by Roman models, e.g. in the use of central oval alabaster medallions, the table tops diverge from those given their bolder scrolls, the choice of stones, the stylized cross motifs at their centre and the thicker white marble framing filets. Related examples include a top sold at Sotheby's Paris, B.B.S.: Un Hommage, 30 Jun 2016, lot 22 (€75,000) and another sold Christie’s London, The European Connoisseur, 5 December 2013, lot 53 (£110,500).

Neapolitan pietre dure is intrinsically related with the work of the sculptor and architect Cosimo Fanzago (1591-1678), one of the greatest figures of the Baroque period in Southern Italy. His work is recorded in many local churches and can be characterized by the use of an astonishing variety of different marbles and stones cut and assembled in distinct ways. During his lifetime, Fanzago continuously maintained his expressive language. He treated architecture as sculpture and rigorously dramatized ordinary natural motifs, thus leading to theatrical visual effects. As he visited Rome twice, from 1638 to 1650 and in 1652, it is also frequent to identify in his work hints of the Roman pietre dure vocabulary. Interestingly, proposition drawings of the altars in the Church of San Francesco di Paola and in the Church of SS. Trinità delle Monache, published in A.Bulifon. Da Sarnelli (1697) (reproduced in Cantone, G. Napoli Barocca e Cosimo Fanzago, Naples, 1984, p.37, p.43), feature motifs highly comparable to the one found at the centre of the present tops. Additionally, the designs of a flower vase in the Church of San Martino, of tightly drawn rosettes in the Church of Saint Teresa and of his numerous Church columns with large flowers recall the aesthetic of the present matched pair of table tops.

The impressive bases, in a style emulating examples from the late Régence / early Louis XV period, have two almost identical counterparts at the Gilbert Collection, one supporting a micromosaic top by Pellicea da Tortona (1996.316 / MM212), other supporting a top with Florentine pietre dure panels after Jacques Callot (1996.317 / MM213). Both these stood once on the great hall at Halton House, Buckinghamshire, house built by Alfred de Rothschild. Those tables were made to fit the above-mentioned tops, and interior photographs from 1892 show them placed to the sides of the hall. To the end of the hall, the same photos show two more carved tables of the same model. Nonetheless, the Halton House inventory of 1912 list these as with “slabs of veined pink and white marble”. The coincidence of the use of this model, plus the existence of another two tables at Halton which have not been located, leads to speculation regarding a potential Rothschild provenance for the present lot, provenance which further research might reveal.

The tables were housed along with Brocket's impressive collection at Bramshill House, Hampshire. Lord Brocket (1904-1967), a politician who worked hard to reach a peace settlement between England and Germany during the Second World War and a barrister educated at Eton College and Oxford University. From a family that made its wealth from brewing, he purchased Bramshill House from the Cope family in 1935. Lord Brocket undertook structural repairs and made sure, in partnership with the National Trust, to preserve the park and building, which had been essentially built by Edward, 11th Baron Zouche of Harringworth (1556-1625). From its architecture to its interiors, the Jacobean country house breaths history, extravagance and wealth. With a house of 36 rooms like Bramshill, Lord Brocket furnished adequately his surroundings. Multiple photographs display a multitude of museum-worth works where Brocket’s taste for heterogeneity in interior decoration becomes evident.