CATALOGUE NOTE
"I'm back to a full palette with off-toned colors… Before, it was about knowing what I didn't know. Now it's about not knowing that I know." (The artist in 1987 in conversation with Edvard Lieber, cited in Edvard Lieber, Willem de Kooning: Reflections in the Studio, New York, 2000, p. 51)

Painted in 1983, in the final decade of his wildly acclaimed, fifty-year career, Untitled VIII belongs to a celebrated series of Willem de Kooning’s later paintings. While still displaying the trace of his distinct formalism, Untitled VIII boasts an enlivened spirit, a new freedom in the endless expanses of ribbon-like brushstrokes and sophisticated exchanges of color. With his celebrated capacity for line, color, and form remaining paramount, these late paintings are novel in their reduced palette and spatial balance—nowhere is de Kooning's distinctive ability as a colorist more poetically asserted than in these 1980s paintings. "The heavy impasto and foamy bliss in his 70's paintings gave way to sanded and scraped surfaces, rainbows of color yielding to thin ribbons twisting on bare backgrounds,” the New York Times critic Michael Kimmelman has described. "You can still see the lyrical, seemingly effortless graphic virtuosity in some of the airy forms that loop and spin across these canvases” (Michael Kimmelman, "The Lives They Lived; Life is Short, Art is Long,” The New York Times, January 4, 1998). As one of these last great, visionary triumphs, Untitled VIII possesses these cutting-edge qualities that are a culmination of his own, evolutionary artistic vernacular.

In an homage to his great forebear Henri Matisse—whose late work, specifically his remarkable cutouts, stages a collapse of the distinction between color and line while maintaining the ever-present reference to the human form—de Kooning here achieves what can be considered the final goal of his life-long investigation into the nature of abstract art. Tapping into decades of experience, de Kooning, turning inward, found a sense of confidence, an interior world only known to him, that stimulated the creativity, freedom and lightness in these late paintings. “I am becoming freer,” he said. "I feel that I have found myself more in the sense that I have all my strength at my command. I think you can do miracles with what you have, if you accept it” (Willem de Kooning, quoted in Din Peters, “Willem de Kooning: Paintings 1960-1982,” Studio International 196, August 1983, p. 4). Evocative of Matisse’s lyrical and sinuous lines and articulated, bold forms, de Kooning's paintings from this period project a sincere inspiration for his predecessor’s ability to illustrate both figure and landscape through color and form. “Lately I've been thinking that it would be nice to be influenced by Matisse,” de Kooning said in 1980. “I mean he’s so lighthearted. I have a book about how he was old and he cut out colored patterns and he made it so joyous. I would like to do that, too—not like him, but joyous, more or less” (Willem de Kooning, quoted in Mark Stevens and Annalyn Swan, de Kooning: An American Master, New York, 2004, p. 589). Untitled VIII’s sweeping brushstrokes and piercing colors embody the investigation into this very language, with its shallow, luminous white paint and striking orange and blue ribbons of color soaring gracefully across the expansive surface of the canvas. De Kooning here arrives at compositional symmetry, forging past the investigation and defining a visual dialect that remains among one of the most inventive, recognizable and transformative of the twentieth century. 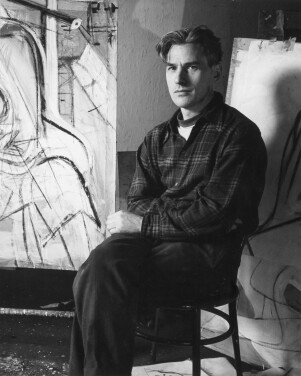