CATALOGUE NOTE
The present Orgone Stretch Lounge will be included with reference number MN - 8OSL - 1993 in the forthcoming catalogue raisonné of limited editions by Marc Newson being compiled by Didier Krzentowski of Galerie Kreo, Paris.

Throughout his career Marc Newson has been exploring in his designs a large spectrum of materials and shapes. One of his most well-known piece is most certainly the Orgone Stretch Lounge which is the outcome of the form Marc was striving for when he made the Lockheed Lounge. However, at the time, he did not have the knowledge or the resources to make it.

This piece is the result of a long process and many experimentations to achieve this perfectly fluid form made of aluminium. If Marc Newson first designed the Event Horizon Table with the theme of the "black-hole", the Orgone Chair and Orgone Stretch Lounge, for which he extruded the legs out of the structure, came as their companions just after. One of each, the table and the Stretch Lounge, are included in the Paris Important Design June sale.

As a fervent car aficionado, Marc has been influenced in some of his designs by the automobile aesthetic and these two pieces were fabricated by British coachbuilders specialising in the restoration of Aston Martins cars. "The original piece in the series, Event Horizon table was completely inspired by traditional automotive iconography and coach building craft. Hence the other pieces in series were similarly influenced, especially once I had ascertained the craft was appropriate for the manufacture of these forms."

It is this passion of cars that in fact made Marc Newson and Michael Stehle, the owner of the Orgone Stretch Lounge, meet years ago at the famous Mille Mila car race in Italy. Both men were racing in this world-renowned event and their friendship started then. For the short story, Michael even bought Marc's Ferrari 225 S Barchetta at a later stage.

As Michael wished to acquire one of his work, Marc directed him towards this specific Orgone Stretch Lounge mentioning that it was a very special piece to him and one of his favourite. "The fundamental shape of the piece was what made it significant to me. In a way it was the strongest expression of the feminine form that I was experimenting with, in relation to my own sculptural work."

Michael made the acquisition of what is the first Artist Proof and the only one ever made in black. If it has been notably made in red, Marc wanted to "try one in black to test the effectiveness of the visual emptiness of the interior (which was in many ways more important than the exterior.)"

This colour, or lack of colour one could say, re-enforces the original idea of a "black-hole" and remove any visual distractions. The eyes are therefore only captivated by the pure and feminine lines of the piece.

Having set numerous records at auction Marc Newson is certainly one of the most well-known designer of the 20th/21st century. His work is present in several major museum collections including the MoMA in New York, the Design Museum and the V&A in London as well as the Centre Georges Pompidou in Paris and the Vitra Design Museum in Germany to name a few. 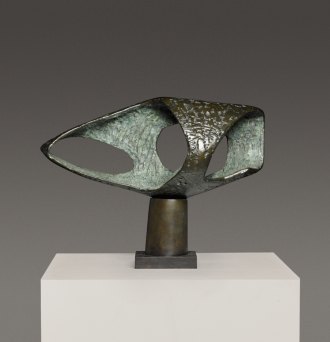