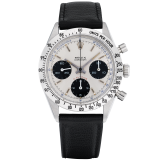 established 1905
Interested in selling a work by Rolex?
Request an Estimate

Lots by Rolex at Sotheby's

A Rolex may be the most instantly recognizable watch in the world, and it’s for good reason: the brand is, in many ways, the industry’s standard-bearer. In 1910, five years after its founding, Rolex produced the first watch to receive the Swiss Certificate for Chronometric Precision, and the brand has been synonymous with exacting watchmaking ever since. While it may not be the oldest watchmaker, Rolex set the template for watches as we know them today, introducing the first waterproof timepiece in 1926, inventing self-winding technology in 1931 and date displays in 1945.

For almost as long as the company has existed, Rolex has been synonymous with sporting and adventure. A Rolex watch was there for the first summit of Mount Everest as well as the first dive into Mariana Trench, the deepest known point on Earth. But, of course, Rolexes are beloved for more than their utility; everyone from Winston Churchill to Steve McQueen to Roger Federer has sported them.

Paul Newman, another devoted Rolex fan, wore his Daytona so often that the style — with its graphic black-and-white dial – is known among collectors as a Newman Daytona. That holy grail piece (only 2,000-3,000 models were produced with that particular design) is one of the most coveted watches in the world. But any Rolex, from the classic Datejust to the rugged Submariner, is an investment for the ages.