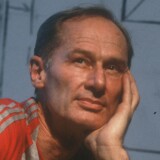 Born 1924. Died 2013.
Interested in selling a work by Richard Artschwager?
Get an Estimate

Works by Richard Artschwager at Sotheby's

The work of American painter and sculptor Richard Artschwager integrates trends from Pop Art, Minimalism and Conceptual Art, though his career avoids exact categorization into any one of these specific movements. His interest in the confluence of the visual and tactile senses led him to explore the interactions between painting and sculpture throughout his artistic career. His works are imaginative, surprising and humorous, and contributed significantly to the development of American sculpture in the 20th century.

Born in 1923 in Washington, DC, Artschwager initially began studying at Cornell University in 1941, but World War II interrupted his studies. After sustaining a head wound, he spent most of the war on administrative duty in Frankfurt, Germany, and held a subsequent intelligence posting in Vienna, Austria. Upon returning to the United States, he completed his BA in 1948 in physics, but later moved to New York to follow his desire to work as an artist. He traveled to Paris, France, through the G.I. Bill to study under Amédée Ozenfant, after which he began designing and producing furniture to earn an income, which would greatly impact his later work in fine art. In the 1960s, he began experimenting with functional objects as well as painting and sculpture, and often worked with Formica to produce work that satisfied the requirements of different types of objects. Table and Chair from 1963–64, likely his best-known work, seems to visually allude to furniture through the traditions of depicting illusionistic space in painting while still functioning as real objects in space. His oeuvre in general investigates the distinctions between representational imagery and real objecthood.

Artschwager was commercially and critically successful during his lifetime, exhibiting at the major galleries of the moment including Leo Castelli in the 1960s and Mary Boone in the 1980s. He had multiple retrospectives at the Whitney Museum of American Art in New York, and major shows at the Centre Georges Pompidou, Paris, the Serpentine Gallery, London, and the Museum of the Applied Arts, Vienna, among many others. His works can be found in the permanent collections of major museums and collections around the world, including the Museum of Modern Art, New York, the Art Institute of Chicago, and the Foundation Cartier pour l’Art Contemporain, Paris.

Museums with Works by Richard Artschwager