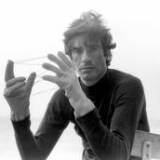 Born in Rome in 1940, Renato Mambor was a member of the 1960s artistic movement known as the Scuola di Piazza del Popolo together with Mario Schifano, Pino Pascali and Jannis Kounellis.

He is one of the first artists to cross over from painting into other languages such as photography, sculpture, cinema, performance, installations, theater, presenting shows of which he is author, director, actor, set designer. The show is his 'work'.

After several years devoted to theatre, he returns to painting in 1987, where he traces the 'function' of objects of use and the 'formation processes' of natural events.

He chooses two-dimensionality as the language of contemporaneity, but mainly investigates a new dimension in which is evident the overcoming of the opposition of polarities (objective-subjective, disturbing-reassuring, art-life), given the awareness that depth "hides in the surface ".