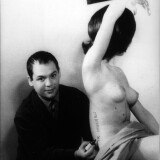 Piero Manzoni has definitively been a radical artistic who contributed to the post-war era. Born in Soncino, he came from the noble family of Meroni Manzoni di Chiosca e Poggiolo.

Self-taught as an artist, Manzoni first exhibited at the age of 23. His early work was showed the influence of Milanese proponents of Nuclear Art, such as Enrico Baj.

The turning point arrives in 1957 when Manzoni visits Yves Klein's exhibition 'Epoca Blu' at the Galleria Apollinaire in Milan. This exhibition consisted of 11 identical blue monochromes.

The result is the series of Achromes, composed by an experimental range of works, all white, executed with various pigments and materials, first as gesso and kaoilin, later he would create Achromes from white cotton wool, fiberglass, rabbit skin and bread rolls.

As well as Yves Klein, these works showed the influence of Lucio Fontana and Alberto Burri and the American artist Robert Rauschenberg.

In 1958 Manzoni goes to Rotterdam where he befriends Gust Romijn, an artist with a past in CoBrA group, and Hans Sonnenberg, merchant and soul of the future Dutch Zero-groep. In this years he has had intense intellectual relations with Jef Verheyen, a young Belgian who, the following year, publishes the Essentialisme manifesto in which he elaborates the concept of "essence" as intimately related to that of "achromia".

Manzoni founded the Azimut Gallery in Milan in 1959 with the artist Enrico Castellani, and staged a series of revolutionary exhibitions of multiples up to May 1960.

Anticipating many art movement such as body art and performance art, Manzoni also experimented the ironic and provocative self-meditation on his own bodily production, such as the famous Artist's Shit (Merda d'artista) created in May 1961. Manzoni's own excrement became a series of 90 small cans, icon art objects whose contents remain a much-disputed enigma, since opening them would destroy the value of the artwork. The use of fingerprints, blood, and breath also figured into his experimental body of work, such as Corpi D'Aria, and the Artist's Breaths (Fiato d'Artista), a series of red, white or blue balloons, inflated and attached to a wooden base inscribed "Piero Manzoni- Artist's Breath".

On January 1961 he organized a new action called Opere vive, or Sculture viventi, in which he signed the base and the body of models in flesh and blood who pose there as sculptures.

Homogeneous to this idea is that of Base magica, a support placed on which anyone can be considered a sculpture by Manzoni.

Aged only 30, Manzoni died for heart-attack in his studio in February 1963.