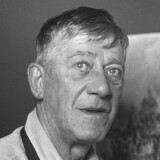 Born 1886. Died 1980.
Interested in selling a work by Oskar Kokoschka?
Request an Estimate

Works by Oskar Kokoschka at Sotheby's

The artist and writer Oskar Kokoschka was born 1886 in the town of Pöchlarn, Austria, but, due to familial financial hardship, he moved with his family to Vienna when he was three years old. At eighteen, he was granted a scholarship to attend the School of Arts and Crafts in Vienna, where he would later work as an assistant teacher. During this period he also joined the Vienna Crafts Studio, which provided him with commissions through 1909. Kokoschka was largely dissatisfied with both the School and Studio, as they centered wholly on decorative arts and excluded studies or commissions of the human figure—a subject that profoundly interested the artist. In his own time, he pursued the human figure in his work, first through quick sketches and occasionally on small canvases, but financial need necessitated that he continue his decorative work.

In 1908, the well-known architect Adolf Loos took an interest in Kokoschka, and took it upon himself to both support and launch the young artist’s career by way of acquiring him commissions and introducing him to other like-minded artists. His earliest works are mostly landscapes that upon first inspection appear Impressionistic, however he sought to present the emotional aspects of each scene through his use of color and line—an artistic approach that typify his oeuvre. He also began experimenting with portraiture, again focusing on the presentation of emotion and character through use of color and brushstroke, resulting in sometimes exaggerated features. Around this time, he also began his writing career, completing several plays that would come to be regarded as foundational works for Expressionist theater.

Kokoschka went on to spend a year in Berlin, Germany—where he had his first solo show—before returning to Vienna in 1911 where he resumed teaching (he would lose his post shortly after due to the public scandal his experimental plays would garner). He continued to show his work, specifically at Der Sturm gallery, which also showed work by artists such as Paul Klee and Franz Marc.

During the 1920s, Kokoschka traveled extensively through Europe, North Africa and the Middle East. He painted numerous landscapes over the course of his travels, resulting in a series that would come to be considered one of the highlights of his artistic career. Ultimately, he returned to Vienna where he met his future wife, Olda Palkovska, and the couple moved to Prague, Czech Republic. By 1937, the increasingly powerful Nazi party had all of Kokoschka’s deemed “degenerate art,” and removed from all German museums and public collections. Despite a major solo exhibition in Vienna that year, by 1938 both he and his wife fled to London due to rising political tensions.

Kokoschka’s time in London during World War II was marked by incredible financial hardship, which forced him to work largely in watercolor, as it was cheaper than oil paint. His work from this period is generally marked by antiwar sentiments, and the human cost of war and revolution. Upon the conclusion of the War, his stature as a leading artist of the time was revitalized, leading to a number of prestigious exhibitions across Europe and in the United States. Finally economically secure, he relocated to Switzerland in 1953. He both wrote and painted prolifically throughout the last years of his life, working into his 90s before he died in 1980. Despite never formally associating with a movement or artistic group, the legacy of is considered exemplar of Expressionism, and would later be cited as a crucial element for Neo-Expressionists such as Anselm Kiefer.

Today, his work can be found in a number of the world’s most prestigious museum collections including the Guggenheim Museum, New York; the National Portrait Gallery, London; and MuMOK, Vienna.

Museums with Works by Oskar Kokoschka