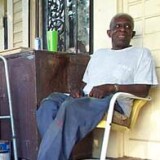 Moses Ernest Tolliver, who signed his works MOƧET, was one of twelve children born to sharecroppers in Pike Road, Alabama July 4, in an unknown year around 1924. With a third-grade education, he worked odd jobs to support his family, including truck farming and landscaping. He was employed as a sweeper at a furniture in the late 1960s when a crate of marble fell from a forklift and crushed his legs, subsequently rendering him unable to walk without assistance. After a period of depression and drinking, Mose was encouraged to try his hand at painting, which soon became his sedulous craft. Before long, his pieces caught the attention of passersby and his front porch became an impromptu gallery. One early admirer was Mitchell Kahan of the Montgomery Museum of Fine Arts, which mounted a solo exhibition in 1981. The following year, his work was included in the landmark show Black Folk Art in America at the Corcoran Gallery in Washington D.C. Tolliver painted and exhibited steadily until shortly before his death on October 30, 2006 in Montgomery. His funeral procession stretched for more than a mile.

Today, Tolliver’s works can be seen in the Birmingham Museum of Art, the Akron Art Museum, and the Smithsonian American Art Museum in Washington D.C.