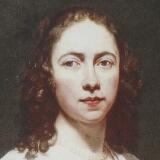 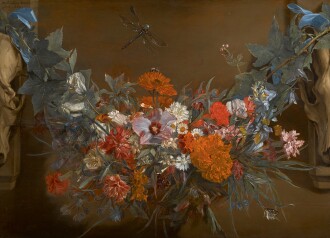 Born in 1604 in Mons, Belgium, Michaelina Wautier was the only daughter in a family of nine children. She appears to have begun her artistic career later in life, around age of 39. Her brother Charles was also a painter, and the two moved to Brussels in 1645, where they both remained unmarried and shared a studio. After her death in 1689, the majority of her paintings remained with her family. This fact – combined with a dearth of documentary evidence about Michaelina – led to the misattribuation of her paintings, namely to her brother. A monographic exhibition in Antwerp in 2018 introduced Wautier to the public for the first time; she had fallen into complete obscurity, only capturing the attention of art historians in the late 20th century. While her fading from history was unfortunately common for women artists before the modern era, the reintroduction of Wautier to the art world provides an opportunity to reexamine her oeuvre and better understand it.

Wautier’s absence from the art historical canon is especially surprising given that, despite the challenges she faced as a woman artist, she did not focus on a single specialty, but rather worked in multiple genres: portraiture, floral still life, genre painting and history painting. The latter was the most unusual feat for a woman artist as it was considered the genre of highest importance and typically required studying live models, from which women were barred. Wautier's religious paintings reveal her knowledge of fellow Flemish artists like Rubens and Van Dyck as well as Caravaggio and his Roman followers. Her sole mythological work, a large Triumph of Bacchus now in the Kunsthistorisches Museum, Vienna, includes a dozen—mostly male—nude figures, showing off Wautier's inventiveness and skill in depicting the human figure even without formal study. While it is unclear if they knew each other personally, it seems Wautier was also inspired by history and portrait painter Jacob van Oost (Bruges 1603 – 1671). Alongside her impressive history and genre paintings, Wautier painted at least two floral still lifes, demonstrating her unique adaptation of trends initiated by Daniel Seghers and Jan Brueghel the Elder.

Type: museum
Kunsthistorisches Museum Wien
Vienna
Type: museum
Seattle Art Museum
Seattle, Washington | Washington
Type: museum
Koninklijk Royal Museum of Fine Arts
Antwerp
Please note that prior performance of the indexes and realized returns contained herein does not guarantee future results. In addition, there is no guarantee that random collections of individual works of art or stocks will yield index returns. We are not financial advisors and we are not in the business of recommending art as an investment. We also have no comparative advantage in forecasting the future direction of the art market. Investment decisions should be based on the risk return tolerance and time horizon of the investor with, if desired, the support of a licensed financial advisor. This information is provided "as is" and with no representations or warranties either express or implied of accuracy, merchantability, fitness for a particular purpose or of any other nature are made with respect to this information or to any expressed views presented in this information.