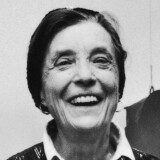 Born 1911. Died 2010.
Interested in selling a work by Louise Bourgeois?
Request an Estimate

Works by Louise Bourgeois at Sotheby's

Louise Bourgeois was a prolific 20th century artist who experimented with a wide range of media, materials, subjects and themes; as such, categorizing or situating her work in one distinct artistic movement remains nearly impossible. She has been linked to Surrealism, American Abstraction and Feminist Art and is well known for her large-scale sculptured and installations, though she also produced many paintings, drawings and textiles. Her work mined themes of family, motherhood, sexuality and the subconscious and the experience of the female body.

Bourgeois was born into Paris in 1911, the middle of three children. Her parents Joséphine Fauriaux and Louis Bourgeois ran a family antique tapestry gallery and their strained relationship had a profound and traumatizing influence on the young Louise, as she witnessed her father’s numerous romantic infidelities and her mother’s feigned ignorance. Bourgeois referred to her practice as a kind of therapy, imbuing much of her work with ideas of jealousy, anger and loneliness, while simulataneously exploring underlying sexual expression.

Her early work focused on printmaking and painting, but she expanded her approach after delving into psychoanalysis, and turned to sculpting in plaster and wood on varying scales. Her marriage to art historian Robert Goldwater and the complexities of her role as wife and mother became central focal points for artistic production. But as her confidence grew, so did the range of her works and her footing as a major voice in the New York art world, hosting “Sunday Bloody Sunday” at her Chelsea home: meetings – named for her humor and ruthlessness – wherein she would critique and aid young artists and students. Her influence on later artists is only matched by her collaboration with younger generations; Do Not Abandon Me, her collaborative project with Tracey Emin was exhibited months after Bourgeois death, and celebrates the joy and pain of human existence.

The Museum of Modern Art in New York held Bourgeois’ first retrospective in 1982, and Bourgeois subsequently forged her career forward at the age of 70 with a newfound vitality and energy. Her work has sold for tens of millions of dollars. Major institutions including the Tate, London; the Solomon R. Guggenheim Museum, New York; the Brooklyn Museum; the San Francisco Museum of Modern Art, and many others, have in recent decades recognized her work as a cornerstone of 20th-century art.

Museums with Works by Louise Bourgeois