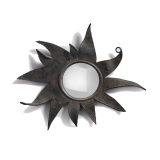 Line Vautrin was born in 1913 in Paris. Self-taught, Line Vautrin created her first gilded bronze jewelry at 20 years old. After working briefly for Elsa Schiaparelli, she exhibited at the Exposition Universelle of Paris in 1937. A year later, she opened her first shop in the 8th arrondissement, Rue de Berri.

As her business grew in 1943, she established her workshop in the Marais and opened a boutique on Rue du Faubourg-Saint-Honoré, where she produced jewelry, fashion accessories and buttons made of metal, glass and ceramic. Line Vautrin moved to Morocco with her family in 1949 and opened a shop in Casablanca to sell her creations as well as vintage objects.

In 1957, she left the right bank to settle 3, Rue de l'Université. She manufactured for famous clients, such as Yves Saint-Laurent, frames, mirrors and decorative objects made from a technique she had developed, talosel resin: the inlaying of tinted glass and mirrors in a resin. In 1962, she closed her boutique to teach.

On December 17, 1986 she auctioned 239 objects from her collection at Drouot, followed by a second sale on December 8, 1987. They marked the beginning of her rediscovery. In 1999, the Musée des Arts Décoratifs, Paris housed a retrospective exhibition of his work, two years after her death.