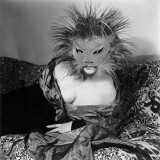 Works by Leonor Fini at Sotheby's 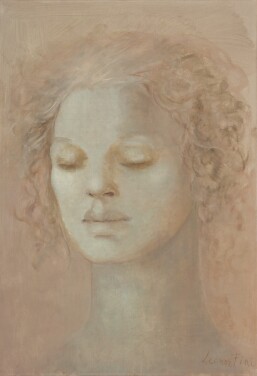 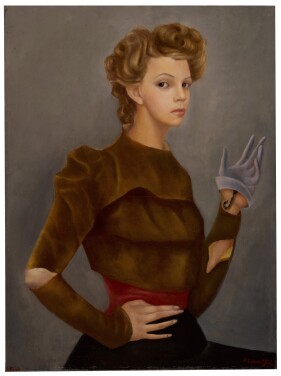 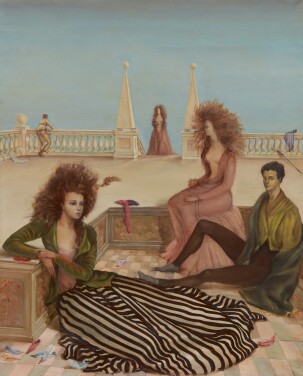 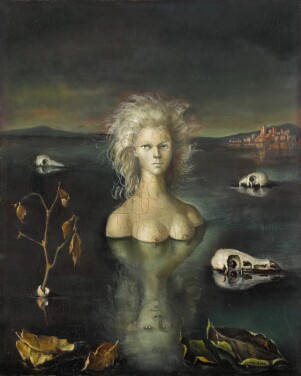 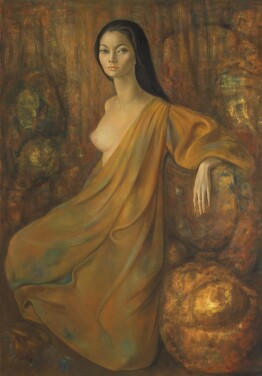 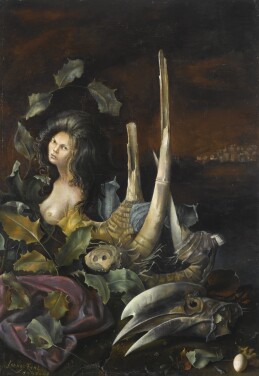 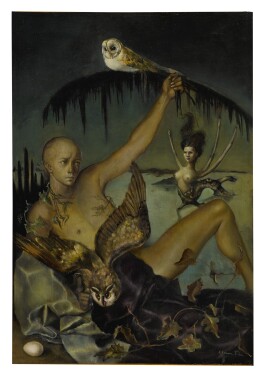 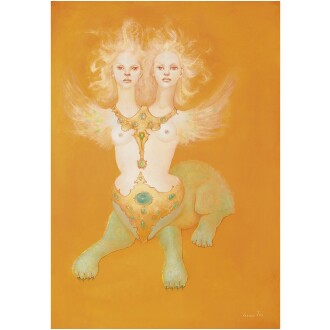 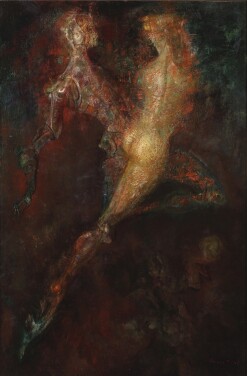 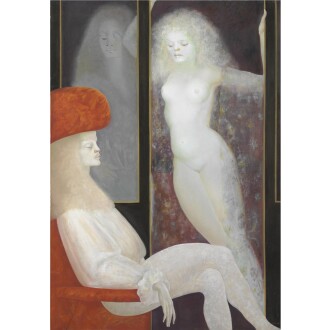 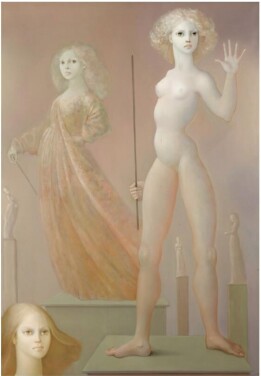 “Her paintings are made up of vertigo,” said Max Ernst of Leonor Fini, “inhabited by the most astonishing collection of legendary beings...Miraculous plays of darkness and light are given ultimate expression in the pulsating pearly colors of this chimerical flesh, that resembles the bifid love-making of sphinxes.” While most women in the Surrealist circle were relegated to the idealized position of muse or the passive position of model—Dalí, after all, maintained that true artistic talent resided “in the testicles”—Fini was a vital creative force in the movement for many decades. Powerful images of women dominate her dreamscapes, but she is also notable for producing, in 1942, what has been called the first erotic male nude ever painted by a woman.

Leonor Fini was born on August 30, 1907 in Buenos Aires, and raised in Trieste, on the Italian–Slovenian border. An ocular disease in her adolescence forced her to wear bandages over both eyes, and after recovering her vision she resolved to become an artist. In Paris, she came to know de Chirico, Picasso, and Dalí and was often seen and photographed in cafe society dressed in men's clothes or in nothing but white boots and a feathered cape. Largely a self-taught artist, she studied the Flemish masters and Italian mannerists and drew upon her own concupiscent dreams for inspiration. Her first exhibition was in a gallery run by Christian Dior, and her first major one-woman show was held in 1936 at the Julian Levy Gallery in New York. She also participated in Peggy Guggenheim's watershed Exhibition by 31 Women alongside such artists as Leonora Carrington, Frida Kahlo, Louise Nevelson, Dorothea Tanning, and Maria de Silva—all of them still in their twenties. A half-century later, her 260-piece career retrospective at the Musee du Luxembourg drew more than 5,000 daily visitors. When she died on January 18, 1996, leaving behind a pair of live-in lovers and a clowder of Persian cats, her obituary in the Independent began, “In the 17th century, Leonor Fini would have been burnt as a witch.”

In 2019, Sotheby's presented The Sleep of Reason, a private collection of extraordinary Surrealist paintings, collages, works on paper, and books, with a special emphasis on the groundbreaking female artists Dorothea Tanning, Leonora Carrington, and Leonor Fini. Fini's work has also been accessioned into the permanent collections of such museums as the Metropolitan Museum of Art in New York, the Miyazaki Prefectural Art Museum in Japan, and the Museo Revoltella in the city of her youth, Trieste.

Type: featured
Category: Collaborations
Claire Olshan On Her Favorite Surrealist Works and Artists
Type: slideshow
Category: Contemporary Art
The Art of Summer and Fire Island’s History as an Oasis for the Queer Community
Please note that prior performance of the indexes and realized returns contained herein does not guarantee future results. In addition, there is no guarantee that random collections of individual works of art or stocks will yield index returns. We are not financial advisors and we are not in the business of recommending art as an investment. We also have no comparative advantage in forecasting the future direction of the art market. Investment decisions should be based on the risk return tolerance and time horizon of the investor with, if desired, the support of a licensed financial advisor. This information is provided "as is" and with no representations or warranties either express or implied of accuracy, merchantability, fitness for a particular purpose or of any other nature are made with respect to this information or to any expressed views presented in this information.