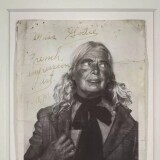 Works by Lee Godie at Sotheby's 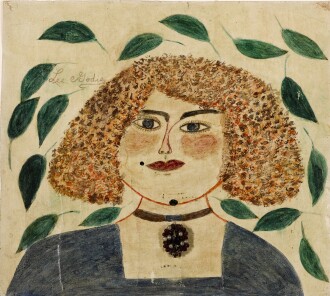 Often considered Chicago's most-collected artist, the self-taught, transient Lee Godie began selling her work on the steps of the Art Institute of Chicago in the 1960s. The offbeat allure of her paintings – often female busts of personal or archetypal significance, rendered in an unmistakable idiosyncratic style that Godie herself favorably compared to Cézanne's – was heightened by Godie's theatrical persona. Donning garish face paint and pieced-together furs, she would incorporate song and dance routines into her sales, exuberantly scumbling the distinction between portraiture and performance art.

Lee Godie maintained an aura of mystery surrounding her early life; when asked her birthdate, she remarked: "I don't celebrate my birthday, I celebrate my status as an artist." We know she was born Jamot Emily Godee in Chicago in 1908. She was married twice, and following the death of two of her four children, Godie reinvented herself as a French Impressionist artist and began living on the streets of downtown Chicago, often sleeping outside in subzero temperatures with her portfolio clutched close. In 1968, she began selling art on the steps of the Art Institute of Chicago and later moved to the North Side after quarreling with a curator. She employed a variety of media including watercolor, pencil, ink and crayon on substrates ranging from poster board to discarded window blinds. She also made self-portraits in photo booths, often dressed in eccentric garb, and embellished them with paint daubs, inscriptions and erasures. In 1991, Chicago Mayor Richard M. Daley proclaimed “Lee Godie Exhibition Month;” that same year, Godie's long-estranged daughter was granted guardianship of her mother who was by then evincing signs of dementia. In November 1993, a major retrospective was mounted at the Chicago Cultural Center. Godie died on 4 March 1994 at a nursing home in Plato Center, Illinois. A posthumous retrospective entitled Finding Beauty was presented at Intuit: The Center for Intuitive and Outsider Art in Chicago.

Today, Godie's work can be found in the collections of the Museum of American Folk Art in New York City, the Milwaukee Art Museum and the Smithsonian American Art Museum in Washington D.C.