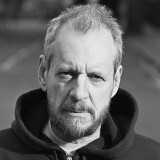 Born 1943.
Interested in selling a work by Larry Clark?
Request an Estimate

Works by Larry Clark at Sotheby's

Photographer and filmmaker Larry Clark is known predominantly for his visceral and unflinching depictions of youth culture in his work—and is often deemed controversial. Clark was born in Tulsa, Oklahoma, in 1943, and fostered his skill and technique in photography through an assistantship with his mother, who was a travelling baby photographer. Later, he undertook two years of commercial photography training, before garnering attention (and notoriety) with his first publication of photographs in 1971, titled Tulsa. Taken between 1963 and 1971, Tulsa is within the vein of documentary photography, and depicts the raw and unfiltered unground drug scene of his home city, and often incorporates images of sex and violence that so often accompanies these scenes. Today Clark lives and works between Los Angeles, California, and New York, New York

Following the publication of Tulsa, in the 1980s and ’90s he furthered his exploration of young people and their specific culture by focusing on teenage boys, subjects he felt were simultaneously “sexualized and demonized.” His first feature film, Kids, a coming of age story centering on a group of teens living in New York City, premiered at the Sundance Film Festival in 1995 and was received favorably; this was followed by numerous other films, but none with the same “instant classic” reception. Nevertheless, his work has remained popular, and he has been the subject of numerous solo exhibitions. His work is within the collections of the Whitney Museum of American Art, New York; the Museum of Modern Art, New York; the Los Angeles County Museum of Art; and the Art Institute of Chicago, among others.

Museums with Works by Larry Clark