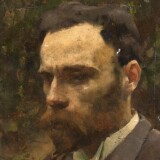 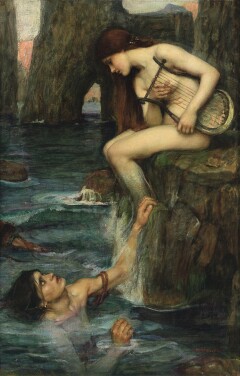 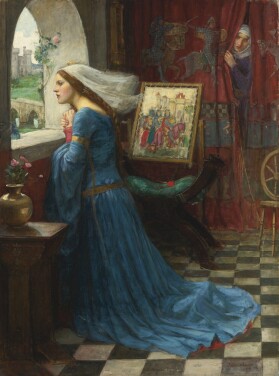 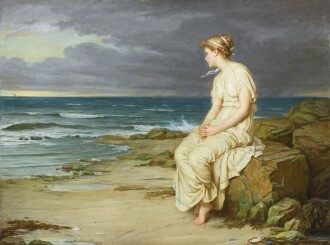 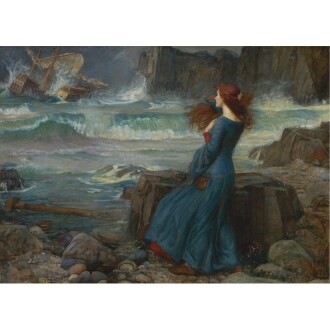 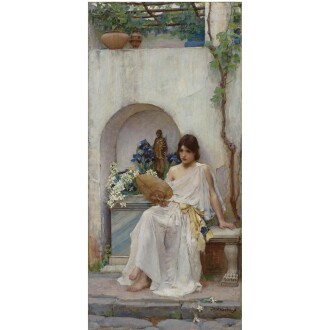 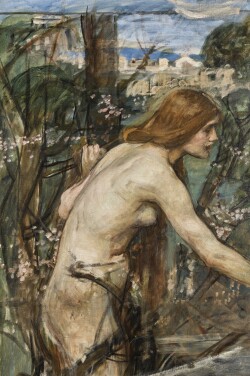 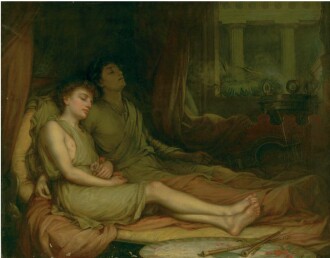 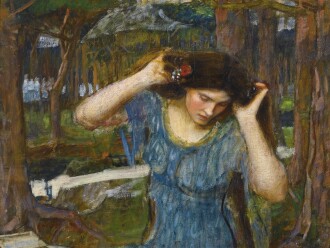 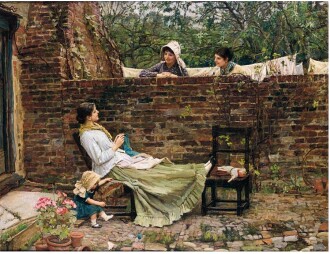 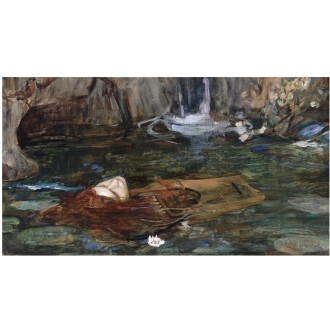 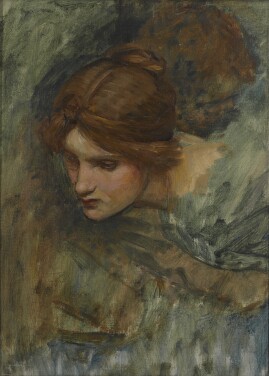 Trained at the Royal Academy of Arts in London, John William Waterhouse painted classical themes in the Academic style before embracing the ethos of the Pre-Raphaelite Brotherhood – the reform movement of English artists who rejected “what is conventional and self-parading and learned by rote” in favor of the limpid color and intricate detail that had distinguished the masterworks of the Middle Ages and early Italian Renaissance.

John William Waterhouse was born in early 1849 in Rome, Italy, to two English painters. In 1854, the family returned to London, and young John was encourage to sketch works in the British Museum, the National Gallery, and the newly founded Victoria and Albert Museum. He entered the Royal Academy in 1871. His 1874 canvas, Sleep and his Half-brother Death, referenced the Greek myth of Hypnos and Thanatos, but more proximally dealt with the recent death of both his younger brothers from tuberculosis; it was exhibited at the Royal Academy, and its reception secured him exhibitions there nearly every year thereafter until his death. In the 1880s, his work began to evince the influence of the Pre-Raphaelites; his luminous paintings of the Shakespearean heroine Orphelia – also a favorite subject of Pre-Raphaelite Brotherhood founders Dante Gabriel Rossetti and John Everett Millais – typified his mature work. While this development might have been considered an apostasy a generation earlier, Waterhouse was elected to the status of full Academician in 1895. He died on February 10, 1917 in London.

Waterhouse's work can be found at the Art Gallery of South Australia in Adelaide, the Tate Britain, London, and the Art Gallery of Ontario, Toronto, among many other major public institutions worldwide. After falling into disfavor in the early 20th century, the market for Waterhouse's best canvases have rebounded prodigiously; auction records of note include an iteration of Ophelia, which sold at Sotheby's in 2001 for $2.04 million. 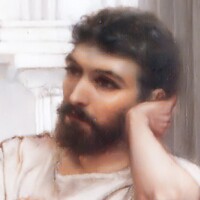