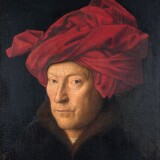 Jan van Eyck was among the great artistic masters of the early Netherlandish Renaissance in the 15th century. His particular skill with minute detail, naturalism and luminous light have been cited as a pivotal turning points in the development of the Renaissance in Northern Europe. His penchant for experimentation and use of collapsed perspectival space intrinsically questioned the nature of artistry, and elevated the discipline of painting to a noble and intellectual pursuit.

Born around 1390 in Maaseik, Van Eyck became a young master by the early 1420s, developing a relatively large studio with multiple workshop assistants. He worked as court painter to Philip the Good, the Duke of Burgundy, in the 1420s, and was sent on diplomatic missions – a common activity for successful artists who had been commissioned by political figures. He is closely associated with the rise in popularity of oil paint during the Netherlandish Renaissance. The translucence of individual layers of oil paint allowed Van Eyck and later Northern European artists to achieve an extraordinary level of detail, rich textures and glowing enameled colors. His success allotted him relative freedom in terms of his subject matter, and he painted both religious and secular works. His depictions of patrons and the discoveries he made in portraiture initiated the rise of the self-portrait genre during the early Renaissance. His Ghent Altarpiece from the 1420s, and the 1434 Arnolfini Portrait, have come to feature as critical bases of Western art historical canon, influencing generations of artists who came after Van Eyck, such as Hans Memling and Albrecht Dürer, and solidifying Van Eyck as a vital figure within the history of Western art. Although no other Netherlandish painter signed their canvases at the time, Van Eyck’s signature, Als Ik Kan, is a witty pun on his name, meaning “As I Can,” a common contemporary Netherlandish turn of phrase. There are only approximately twenty known extant Van Eyck paintings, most of which occupy the some of the most significant and visited art museums in the world, including the Metropolitan Museum of Art, New York, the Louvre Museum, Paris, and the Prado Museum, Madrid.

The Metropolitan Museum of Art
New York, New York | New York
Musée du Louvre
Paris
Museo Nacional del Prado
Madrid
Please note that prior performance of the indexes and realized returns contained herein does not guarantee future results. In addition, there is no guarantee that random collections of individual works of art or stocks will yield index returns. We are not financial advisors and we are not in the business of recommending art as an investment. We also have no comparative advantage in forecasting the future direction of the art market. Investment decisions should be based on the risk return tolerance and time horizon of the investor with, if desired, the support of a licensed financial advisor. This information is provided "as is" and with no representations or warranties either express or implied of accuracy, merchantability, fitness for a particular purpose or of any other nature are made with respect to this information or to any expressed views presented in this information.