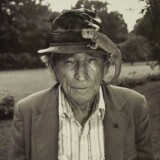 Born 1916. Died 2001.
Interested in selling a work by Howard Finster?
Get an Estimate

Works by Howard Finster at Sotheby's 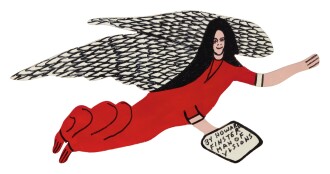 Howard Finster was a Baptist minister and artist from Trion, Georgia, whose work overlaps the outsider, visionary and folk art movements. Finster’s most significant work is Paradise Garden, a folk art sculpture garden he created on his plot of swampland. Claiming he’d discerned a divine mandate to undertake the endeavor, Finster filled the garden with some 46,000 icons, both biblical and secular, from John the Baptist to Marilyn Monroe.

Finster was born on 12 December 1916 in Valley Head, Alabama, to a family of farmers; he was one of thirteen children. At age three, Finster reported his first mystical vision: his recently deceased sister walking on air in a long white gown. A tent revival led him to become a born-again Baptist at thirteen, and he began to preach at sixteen. In 1961, he moved to Pennville, Georgia, where he bought four acres of land and began constructing an Eden-inspired open-air museum, featuring a five-story chapel, hubcap tower and signs painted with bible verses. Finster retired from preaching in 1965 to focus his efforts on the museum. In 1976, he received another vision that bade him begin painting sacred icons; he did so, developing an unmistakable style that combines flat, crisply delineated planes with dense, obsessive textual inscriptions. In the 1980s, Finster gained national fame after collaborating with R.E.M. and the Talking Heads on album covers, which he viewed as potent religious outreach: “I think there’s twenty-six religious verses on that […]cover I done for [the Talking Heads.] They sold a million records in the first two and a half months […], so that’s twenty-six million verses I got out into the world in two and a half months!” That decade, he also appeared on Johnny Carson’s Tonight show and participated in the Venice Biennale. With a spirit that spilled over the definitions of folk, outsider and visionary art, Finster continued making art until the day of his death on 22 October 2001.

A portion of Paradise Garden is installed as a part of Atlanta’s High Museum’s permanent collection. You can also see his work at the Smithsonian American Art Museum in Washington, D.C., and the Philadelphia Museum of Art.

Collectors
Highlights from The Collection of Marsha and Robin Williams