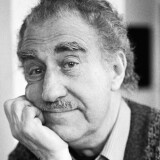 Born in Venice, he began his career in graphics. In 1939 the artist traveled to Paris on the occasion of his first solo exhibition at the Galerie Rive Gauche.

Santomaso then participated in the Quadriennale of Rome in 1943 and executed illustrations for Paul Eluard’s Grand Air in 1945. In 1946 he was a founding member of the antifascist artists’ organization “Nuova Secessione Artistica Italiana—Fronte Nuovo delle Arti” in Venice.

In the same year Santomaso made the acquaintance of Peggy Guggenheim, who was transferring her collection to Venice, and became her friend and collaborator.

Particularly important for the development of his non-objective style is the journey to New York in 1957, on the occasion of his first exhibition in the United States at the Grace Borgenicht Gallery, during which the artist met the leading members of the Abstract expressionism.

The image of his beloved Venice returned to dominate Santomaso's painting between the Seventies and Eighties up to the last works, not in the form of a restitution, but as a touching chromatic fragment.