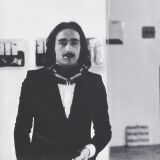 Controversial and mysterious protagonist of the art scene from the Seventies to 1998, year of his death, he defined himself as a painter, sculptor, philosopher and architect. His work is independent and cannot be framed in a specific artistic current, which he rejected all.

His reputation developed as much out of an absence as from a presence: he avoided the press and refused to have any of his works reproduced photographically.

His first show was at Rome's Galleria L'Attico in 1969 and then his first appearance in Venice Biennale was in 1972 with a shocking performance called Seconda soluzione d'Immortalità (L'Universo è Immobile).

Fascinate from occultism and ancient cultures, he in particular in the myth of Gilgamesh and Urvasi, he believed that art was not communication, but creation, magic and mystery, and he often used alchemical and religious archetypical elements such as the cross, the pyramid, the stars, the geometric figures.