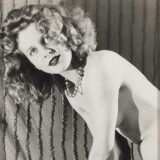 For over forty years, Wisconsin baker Eugene Von Bruenchenhein quietly amassed a prolific and expansive body of work, ranging from chicken bone towers and ceramic crowns to coquettish pinup photographs starring his wife and fantastical finger paintings conjuring charybdic swirls and thermonuclear detonations. Only his closes friends knew anything about his artistic passions; it wasn't until after his death that his work was shown to the outside world.

Edward Eugene Von Bruenchenhein was born on July 31, 1910 in Marinette, Wisconsin. He married Eveyln “Marie” Kalka in 1943, and she became his first artistic muse: he set up a darkroom in their bathroom and created elaborate backdrops, props and costumes for Marie to pose with. By the mid-1950s, these provocative portraits numbered in the thousands, and Von Bruenchenhein began to take up painting. Using his fingers and found tools like sticks and combs to manipulate oil paint, he quickly established a distinctive practice that evoked hallucinatory visions of underwater gardens, enchanted towers and atomic apocalypse. After a decade and several hundred paintings, Von Bruenchenhein's focus shifted again to sculpture, exploring architectural and foliate forms with ammonia-soaked poultry bones and clay from nearby construction sites. After Von Bruenchenhein's death on January 24, 1983, a friend brought his oeuvre to the attention to Russell Bowman, the director of the Milwaukee Art Museum and the John Michael Kohler Arts Center in Sheboygan, which began cataloguing the collection. The following year, the Kohler Center mounted the first exhibition of Von Bruenchenhein's work; numerous museum shows would follow, including an extensive retrospective in 2010 at New York’s American Folk Art Museum.

Von Bruenchenhein's work can be found in the permanent collections of the High Museum of Art in Atlanta, Intuit: The Center for Intuitive and Outsider Art in Chicago and the Smithsonian American Art Museum in Washington D.C.