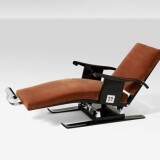 Nicknamed the Riesener of Art Deco, Émile-Jacques Ruhlmann is one of the most famous furniture designers of the early 20th century as well as a talented decorator.

Born in Paris in 1879, he quickly joined the family business. Without any cabinetmaker's training, he designed, with his workshop, furniture featuring pure lines, noble materials and whose modern sensibility seduced soon the greatest collectors looking for refinement. Lover of fine veneers, he accurately selected rare species and combined them with marvelous ivory marquetry or shagreen inlays.

His architect's eye allowed him to design interiors down to the smallest detail, from furniture to wall and floor coverings, from ironwork to lighting, creating complete works bearing his signature. His participation to the Salon d'Automne in 1913 made him renowned, but it was in the 1919 edition that he exhibited the Desserte aka Meuble au Char, a masterpiece of Art Deco, which gained him a reputation over the years and commissions. In 1925, during the Exposition Internationale des Arts Décoratifs et Industriels Modernes, the Hôtel du Collectionneur was the most visited and appreciated pavilion.

The architecture was entrusted to his long-time friend Pierre Patout and the bas-reliefs to the sculptor Joseph Bernard. This monument is considered as the synthesis of the Ruhlmann style.

Reaching this level of perfection, he had nothing more to prove, his success was worldwide. He died on November 15, 1933 in Paris.