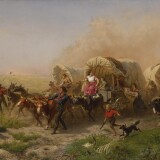 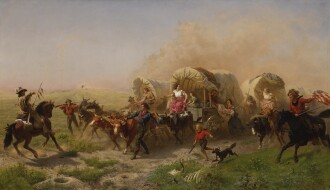 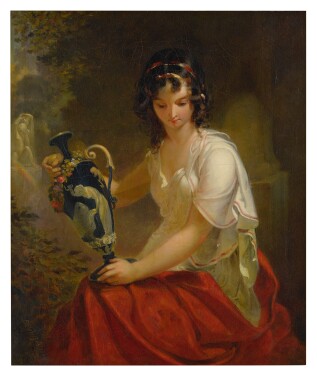 A German-born immigrant to the United States, Emanuel Gottlieb Leutze painted large, dramatic scenes from United States history imbued with patriotic emotionalism. Educated at the renowned Kunstakademie Düsseldorf, Leutze’s highly finished canvases and careful rendering of detail made him a leading artist of the Düsseldorf school. His best-known work, the iconic Washington Crossing the Delaware (1851), remains one of the most recognizable and widely reproduced images of American history.

Leutze was born in Schwäbisch Gmünd, Württemberg, Germany in 1816. He was brought to the U.S. as a child, first settling in Fredericksburg, Virginia, and then in Philadelphia. He displayed artistic talent early on; following his father’s death, the 14-year-old Leutze supported himself by painting portraits for $5 apiece. In 1840, he returned to Germany to attend art school. After traveling throughout Europe for several years, Leutze settled in Düsseldorf, where he became a prominent figure in the artistic community. In 1850, hoping to re-energize the liberal reformers of the German Confederation after its defeat by the Austrian Empire in 1848, he completed his first version of Washington Crossing the Delaware. The second painting, a replica of the first, was completed the following year; today, only the 1851 version survives, as the first was destroyed in a bombing raid during World War II.

By the end of the decade, Leutze had returned to the United States, dividing his time between New York and Washington, D.C. During this period, he executed numerous portraits and public commissions, including the mural Westward the Course of Empire Takes its Way (1862) for the U.S. Capitol building. Leutze died in 1868 at the age of 52 in Washington, D.C. Today, his works can be seen in the public collections of the Metropolitan Museum of Art in New York, the Smithsonian American Art Museum in Washington, D.C. and the Museum of Fine Arts, Boston.

Type: video
Category: Anatomy of an Artwork
Emanuel Gottlieb Leutze’s Romantic Vision of the American Frontier
Type: slideshow
An Evening of Masterworks by Georgia O’Keeffe, Peter Doig & More in Dallas
Please note that prior performance of the indexes and realized returns contained herein does not guarantee future results. In addition, there is no guarantee that random collections of individual works of art or stocks will yield index returns. We are not financial advisors and we are not in the business of recommending art as an investment. We also have no comparative advantage in forecasting the future direction of the art market. Investment decisions should be based on the risk return tolerance and time horizon of the investor with, if desired, the support of a licensed financial advisor. This information is provided "as is" and with no representations or warranties either express or implied of accuracy, merchantability, fitness for a particular purpose or of any other nature are made with respect to this information or to any expressed views presented in this information.