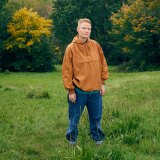 Born 1974.
Interested in selling a work by Charlotte Prodger?
Request an Estimate

Born in Bournemouth, Charlotte Prodger began her studies at Goldsmiths and later The Glasgow School of Art. Moving image, writing, printed image, and sculpture are the principle components of Prodger’s practice. Now living and working in Glasgow, Prodger’s work delves into topics of queerness, landscape, language, technology and time.

Being inspired by the materiality of film and its bodily connection to photographers, much of Charlotte Prodger’s work explores the intertwined relationship between the body and technology.

In 2018, Prodger won the Turner Prize with BRIDGIT/Stoneymollan Trail, her solo show at Bergen Kunsthall (2017) featuring two single-channel videos. In Stoneymollan Trail (2015), Prodger develops a multimedia video format that can be directly associated with the artist’s personal history. The video features material from Prodger’s extensive personal archive of mini-DV cassettes, high-resolution digital film and iPhone videos, as well as screenprinted graphics. Stoneymollan Trail also plays with the geometry of 16:9 (widescreen) and 4:3 (standard) aspect ratios on a single screen, exploring the motif of the grid that appears across much of Prodger’s work. Alternating between the widescreen and the standard, the film explores the physicality of the screen and how notions of landscape, culture and even reality can be challenged through fluctuating perspectives. BRIDGIT (2016) was shot entirely on Prodger’s smart phone and explores how bodily systems are entangled with the camera and connected through a touch screen.

Prodger’s work also delves into how the commodification of queerness and queer aesthetics in popular media is leading to an infringement of queer spaces that have been historically founded on the self-determination of queer communities.

+ Venice at La Biennale di Venezia, 2019. The work also toured across seven venues in Scotland throughout 2019.