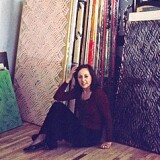 Born in Sicily, Accardi moved to Rome in 1946. The year after, she founded the movement Forma 1 with artists Pietro Consagra, Giulio Turcato, Piero Dorazio and Antonio Sanfilippo who married in 1949.

In the 50ies Accardi’s paintings first were mainly in black and white, focusing on monochrome, color, and shapes. In the 60ies the artist focus her analysis on the pure content and power of colors, through her unmistakable graphic structures which compose her typical patterns and shapes.

She also began using a clear plastic material called Sicofoil, which she describes as "like something luminous, a mixing and a fluidity with the surrounding environment”, creating large plastic installations.

Carla Accardi is the first woman abstractionist to have international recognition and she has always been very attentive to the role of women in the society and in the art world, at that time very restricted-viewed.