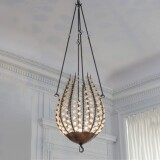 André Dubreuil is not only a designer but also a craftsman. He began his career by interning in antique shops. At the age of eighteen he moved to England to study drawing at the Inchbald School of Design, while exploring the London underground nightlife scene.

After graduating, he started working for a decorating agency and designed flats with trompe l'oeil paintings. His furniture design career truly began in 1985 when he realized the interior decoration of a chocolate shop called Rococo. He learnt the art of ironwork with Tom Dixon and Mark Brazier-Jones.

This group chose the name Creative Salvage and quickly became the reference for 80's English avant-garde design. His first welded iron creations are subtle and elegant, all curves and lines, visual and daring in reference to the rocaille furniture of Louis XV.

The Spine Chair, a three-legged chair with a cross-shaped back, brought him international recognition. It is exhibited in several museums, including the permanent collections of the Victoria & Albert Museum in London. André Dubreuil also works with copper, which he hammers as well as steel and enamel.

As a craftsman, he manufactures each piece himself by hand, making them unique. He returned to France in 1992 and settled in the family home in the Dordogne to continue his work.