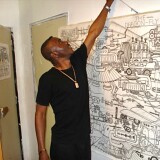 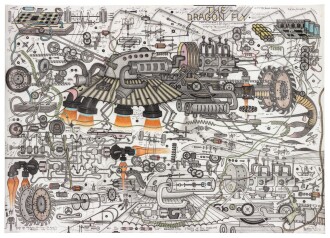 Abu Bakarr Mansaray was born in 1970 in Tongo, Sierra Leone. Although he left school in 1987, Mansaray has always been an autodidact and studied science and engineering in textbooks. Combining the popular central African practice of creating decorative objects and toys out of iron and wire with what he learned from his studies, Mansaray began building functional, futuristic machines. He creates both practical and extravagant contraptions which can produce dire, water, light, sound and more. Mansaray’s preparatory studies for his machines are works of art in their own right. They are executed in colored pencil and ballpoint pen and are annotated with his commentary and calculations.

In 1998, the artist escaped civil war in Sierra Leone and fled to the Netherlands, where he lived for several years. Today he lives and works in the capital of Sierra Leone, Freetown.
The trauma of living in a war zone can still be seen in his works, which combine fantasy (aliens, UFOs, automata in the form of animals) and reality (machine guns, blood, drones).
Mansaray is recognized as a leading Afro-futurist and has been featured at the Venice Biennale curated by Okwui Enwezor (2015); the Fondation Louis Vuitton (2017); the Guggenheim Bilbao (2006); and many other museums and galleries around the world following his international debut at the Lyon Contemporary Art Beinnale (2000). Works by Mansaray are in such collections as the Houston Museum of Fine art and the Jean Pigozzi Contemporary African Art Collection.