B orn in Osaka City, Japan in 1938, Yuko Nasaka, who features in a new exhibition at the S|2 Gallery in London from 6 September until 2 October, was one of the first and few women to be invited to join the Gutai art group, an avant-garde Post-War Japanese artistic collective. Several aspects of Nasaka’s early childhood influenced the work she would later produce. Her mother’s family owned a factory populated with many industrial tools, most notably circular meters used in ships, inspiring Nasaka’s use of the circle as a motif throughout her work. The factory was also in close proximity to a company producing cardboard; a material that Nasaka has often utilised in her work.

While Nasaka never officially studied art, she took up painting at an early age in her junior school and in 1953 entered Osaka Prefectural Ichioka High School, where she continued to paint landscapes and portraits at an art club. In 1956, Nasaka continued her education and attended the Osaka Shoin Women's University. Here, she enrolled in a ‘Daily Life’ course, as well as involving herself in the art club run by Sho Matsui, who was connected to the Nika-kai (Second Section) association, a group made up of fauvist style painters.

After graduating from Osaka Shoin Women’s University, Nasaka married fellow artist Senkichiro Nasaka. The couple moved to Ibaraki City, Osaka, where their first daughter was born. During this early 1960s period, Nasaka began experimenting with abstraction simultaneously in several different styles. One of her most innovative works at this time was executed by drilling numerous holes onto large sheets of cardboard, which were later replaced by plywood. The works exemplified her intense engagement with texture, which she continued to explore throughout her career. Nasaka entered her works with holes into several juried exhibitions, including the 15th Ashiya Art Exhibition of 1962, where she was presented with the Mayor’s Award and the Fifteenth Anniversary Prize.

The following year, aged only twenty-four years old, Nasaka was invited by the mentor and leader of the Gutai Art Association, Jiro Yoshihara to join the art group. Yoshihara was one of the jurors of the Ashiya City Exhibition and had taken notice of Nasaka’s work and provided her with membership. The Gutai Group strived to create artworks that followed Yoshihara’s ideology; to “be original and do something that had never been done.” The group sought to achieve this by trying to recapture the innocence that they believed had been taken from the Japanese people during the Second World War, with works created through an active, performance-based, artistic practice.

Nasaka’s own goals, to never restore a tradition, but to create something unique and contemporary, aligned with the Gutai group’s ideology. For her first solo exhibition at the Gutai Pinacotheca in 1964, Nasaka filled the walls with a number of concentric circle works, creating a bold visual impact on the space. The show was a very important moment for both Nasaka and the Gutai group as a whole. Visitors to the exhibition included internationally prominent figures from the art world, such as, Robert Rauschenberg, Merce Cunningham and John Cage. The circle became a constant in Nasaka’s work; its unbroken form could visually represent her interest in endlessness and infinity. Her circles were also planetary shapes, which she transformed through an intricate and experimental use of texture and colour.

Nasaka would continue to play a significant part in the critical transformation of Gutai over the years, particularly from Phase One (1954-1962) to Phase Two (1962-72) in which the group moved away from gestural abstraction towards a more minimal abstraction with differing conceptual concerns. Nasaka’s work continues to illuminate a poetic balance between art, technological advancement and the human experience. Her practice can be characterised by a highly skilled experimentation in new materials through avant-garde methods, and its ability to simultaneously offer a deeply contemplative object which ties together traditions of Zen Buddhism with the experience of a rapidly industrialised post-war Japan. Through her art, Nasaka was able to transcend certain social barriers and expectations that women faced at that time in Japan.

After a two-decade break, Nasaka began creating artwork again, holding several solo exhibitions in Tokyo in 2014, and Antwerp in 2015. The presentation of her work at S2 London this September will be her first exhibition in Britain.

The Yuko Nasaka exhibition is currently on view at S|2 Gallery, London, until 2 October. 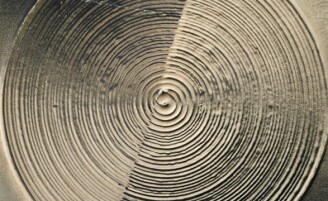