Under Cover: Artforum and Six Decades of Contemporary Art

N o magazine has kept track of the contemporary art world quite like Artforum. Or as The New Yorker’s art critic Peter Schjeldahl put it, “It’s the art magazine, whose role is to hold up a two-way mirror to the rising generation, so they can see themselves and we can see them from the other side.” This summer saw an opportunity for a wider audience to get acquainted with the groundbreaking work Artforum does through an exhibition of every single cover they have ever published. Held at Sotheby’s New York and heralding a new partnership that coincides with the digitisation of every issue of the magazine, it was a fascinating glimpse into how the art world has changed over the last 57 years.

Holding a Mirror to the Art World - The Power of Artforum

Anthony Korner, the proprietor of Artforum, is clear on why the covers are so compelling: “It’s an opportunity to elevate new artists, and has often been the catalyst that launches a career.” Indeed, the collection of covers ends up creating a who’s who of late-20th- and early-21st-century art. But there’s more to Artforum and its covers than an ability to pinpoint the important artists at work during a given moment. For current editor-in-chief David Velasco, the hallmark of a great Artforum cover is that “there is always more to the image than you see at first”. “It makes you look once and then again, and you see more and more,” he says.

Curiously, when asked to pick out his favourite issue, Velasco selects an image not of an artist but a fashion designer. “The one that comes to mind is the Issey Miyake cover from 1982. It was totally daring to put a fashion designer on the cover, especially a young fashion designer at that time. That whole issue was transformative and to me that has the staying power of this compelling image, mixed with the sense that what you’re looking at isn’t exactly what you’re getting.” 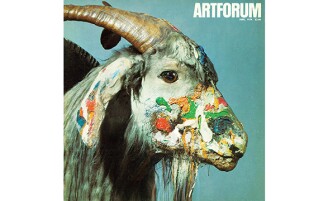 Of course, Artforum doesn’t have the reputation it has solely for its covers. They may offer an extraordinary chronicle of contemporary art, but they are one part of a broader story of a magazine that occupies a very particular position. Artforum considers itself a journal of record, or as Velasco puts it, “a witness to all the most important developments in the art world”. For Korner this is a vital role: “We act in the belief that the role of informed criticism is urgent and essential to a healthy society.”

But the magazine’s place in the art ecosystem does not end there. When Nan Goldin began her current campaign about the opioid crisis, she started it with a portfolio that was published by Artforum. As Velasco says, “On the one hand we were there to see this transformation in the artist’s role in activism, but we were also helping to make it.”

It’s unusual for the editor of an art magazine to be able to consider their publication “a primary source”, as Velasco says. But it is this position that not only gives Artforum its credibility but also its excitement. “We’re not just recording the conversation, we are part of the conversation.”

Velasco acknowledges that in the time he has been at Artforum, since 2005, things have changed quite a bit. “It was a moment when the market was expanding. In the last 14 years, the whole art world has changed.” The challenge for any editor is how to adapt to that. Artforum has kept up with the greater emphasis on activism and artists’ roles in politics, described by Velasco as “something we are trying to both measure in the magazine and also enliven”.

"It’s an opportunity to elevate new artists, and has often been the catalyst that launches a career."

Yet it is not just these social trends that keep Artforum at the cutting-edge of criticism. Velasco admits, “There’s no way I can keep track of everything going on and possibly arbitrate between every single worthy movement in the art world.” Instead, he places his faith in the thing that is at the heart of all great magazines: the writers. “When they have something that interests them I know I’m going to be interested,” he says. For Velasco, there is an instinctual element to editing Artforum. “What I can do is fall in love with certain artists or certain writers, and in that I can let them take me and the reader places that we wouldn’t otherwise go.” 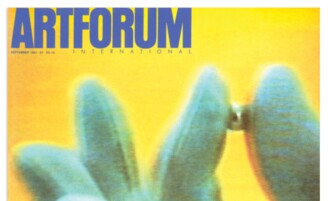 This openness to the unexpected and dedication to uncovering the important has led to what might seem counterintuitive in such a digital-saturated world – the increasingly principal role of the magazine as a printed object. Korner is keen to point out that there is “no digital substitute for the impact of the cover, a feature, or a review in print”, suggesting that despite the very changing world it chronicles, the magazine is here to stay. Just as the covers invite you to, it’s time to look again at Artforum.