Encountering a fabled private collection first-hand is an experience many only dream of. Great collections, assembled over critical periods in history, are the culmination of extraordinary curatorial vision, personal taste and often privileged relationships with artists and critics. The best of them end up amassing the most stellar examples of art from seminal periods.

This Spring in Hong Kong we are honoured to present three masterworks of post-war Japanese and Korean art from a distinguished private American collection that houses some of the most representational works from the category.

Ferociously exuberant yet infused with elegant chromatic grace, Untitled is a rare early period “bottle crash” masterpiece created in 1962 – the year in which Shimamoto became the first Gutai artist to be honoured with a solo exhibition at the newly opened Gutai Pinacotheca. The work was created via the artist’s signature method of hurling glass bottles full of coloured paint onto large canvases laid out on a hard surface or stones; as the bottles shatter and burst, the explosions of paint create dazzling patterns of extraordinary vitality and vigour.

First performed in 1956, Shimamoto’s groundbreaking “bottle crash” method is one of the artist’s most important contributions to early Gutai that drove forth a pivotal force in the post-war period – one that epitomized revolutionary creation via destruction and regenerative liberation via complete and utter annihilation.

The monumental diptych Work  is one of the most important works of Uemae Chiyu’s pioneering Gutai-period paintings – one that was illustrated as the frontispiece of the catalogue of the artist’s solo exhibition at the Gutai Pinacotheca in 1966. The masterpiece exhibits Uemae’s extraordinary aesthetic of ishu or chumitsu – Japanese phrases that describe the condition of thick or dense crowding.

The result of a laborious process of meticulous accretion, the work reveals a persistence of time and dedicated activity imbued with an incandescent presence reminiscent of pointillism or Vincent van Gogh’s paintings from his final years. French critic Michel Tapie was known to have showered praise on Uemae’s pointillist paintings – a testament to their pioneering innovation and historical significance.

Rounding up the group, Ecriture No. 5-80 is paradigmatic of Park Seobo’s 1980s works – a period in which the pioneering leader of Dansaekhwa achieved an apex of transcendental sublimity in his iconic Ecriture series. Fusing monochromatic serenity with an inherently dynamic sense of rhythmic motion, the painting exhibits masterful calligraphic spirals that leap and curl with a looser density than his 1970s paintings.

Across the vast monochromatic vista of the work, Park’s articulation of a new conception of painting—one that simultaneously evokes the ruminative practice of Korean calligraphic tradition and the radical purity of contemporary minimalism—initiates an unprecedented visual dialogue between East and West, opening both up to an entirely new visual mode.

German critic and novelist once said: “All great works are trophies of a victorious struggle.” This is certainly true for the pioneering post-war arena of artistic creation in Asia, which forged a triumphant avant-garde from the rubble of war and devastation. The present three works stand as testament to the potent possibilities of destruction and rebirth that prompts fresh perspectives on art and creation. 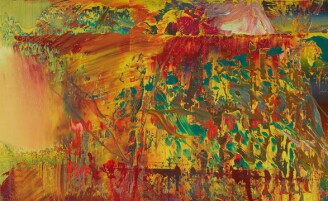