Elisabeth-Louise Vigée Le Brun (1755–1842) was one of the most successful portraitists of 18th century France, gaining renown in particular for her self-portraits and depictions of courtly women that included Queen Marie Antoinette. The daughter of an enlightened male artist, she was one of very few women to gain entrance to Académie de Saint-Luc and achieved great professional success in her lifetime. During Sotheby's Master Paintings Evening Sale (30 January), her imposing portrait of Muhammad Khan, India's ambassador to France, sold for an astounding $7.2 million, setting a new world auction record for any female artist of the pre-modern era. Below discover the fascinating political history behind this one-of-a-kind portrait.

O n July 16, 1788, almost a year to the day before the storming of the Bastille, three ambassadors from Mysore, India, arrived in Paris. Muhammed Dervish Khan, the lead ambassador and subject of Vigée LeBrun's portrait, along with the scholar Akbar Ali Khan and the elder Muhammed Osman Khan, were sent by Tipu Sultan, the powerful ruler of Mysore (1750-1799) who sought the support of Louis XVI in an effort to drive the British out of India, unaware that Louis XVI’s power was beginning to deteriorate, and that the King’s taste for extravagant foreign goods over those made at home was stirring up tensions in the country.

"I saw these Indians at the opera and they appeared to me so remarkably picturesque that I thought I should like to paint them. But as they communicated to their interpreter that they would never allow themselves to be painted unless the request came from the King, I managed to secure that favour from His Majesty."

In this volatile political climate the three ambassadors arrival nevertheless caused a sensation in Paris as they made their way to Versailles with local newspapers like the Journal de Paris reporting on the ambassadors’ whereabouts almost daily. In 1788, Vigée Le Brun, who was at the height of her fame and influence among the powerful elite of Paris and Versailles, saw the ambassadors at the Opera. She recalled of the encounter, “I saw these Indians at the opera and they appeared to me so remarkably picturesque that I thought I should like to paint them. But as they communicated to their interpreter that they would never allow themselves to be painted unless the request came from the King, I managed to secure that favour from His Majesty.”1 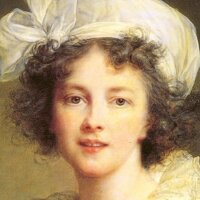 As Muslim men, the ambassadors being represented pictorially, let alone by a female artist, was unheard of, however after the request came from the King, they agreed to sit for her at their hôtel in Paris. She painted Dervish Khan first, “standing, with his hand on his dagger. He threw himself into such an easy, natural position of his own accord that I did not make him change it.”2

The resulting portrait of Dervish Khan.. is an extraordinary reflection on a French woman’s perception of a powerful Indian man. The intensity in which Dervish Khan is portrayed is unlike any other portrait by Vigée. There is an initial element of fierceness in the portrait, but the elegance and grandeur of the costume overcomes that. He wears the traditional costume that so enamored the French men and particularly women who encountered his embassy, so fascinated by the Indian fabrics which were making their way into French fashions. Indeed this sheer, layered white muslin recalls the dress scandalously worn by Marie-Antoinette in a portrait painted by Vigée a few years prior.

However, the turmoil had only just begun. When the painting had finished drying, Vigée sent for the works but was refused; Dervish Khan had hidden his portrait behind the bed. The ever-resourceful Vigée strategically convinced his servant to steal it back for her, only to later hear that Dervish Khan had then planned to murder the servant for this transgression. Dervish Khan was only mollified when he was falsely reassured that it was the King who wanted the portrait.3

Back in the artist's possession the painting was exhibited at the Salon of 1789, opening in August, amid a disquieting political climate and was received by the public with immense curiosity and critical acclaim. By October, however, Vigée had fled Paris in fear of her life after mobs had invaded Versailles. It can be surmised that she kept the work in her personal collection but left it at home in France when she went to Italy, given that the painting next appears in the estate sale of her husband, Jean-Baptiste Pierre Le Brun. 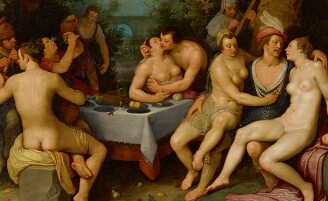 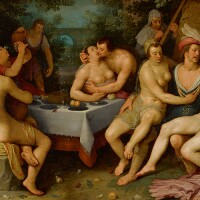 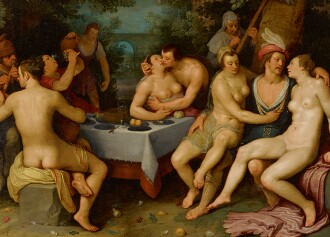 Dervish Khan met an even more fateful demise. The embassy did not achieve their goal of a treaty with France and upon return to Mysore the ambassadors were beheaded for their failure. These years marked a turning point in Europe’s relationship with India; while a mutual exoticism and fascination was nurtured for the centuries leading up to this point, by 1799 the divide of “East” and “West” had shifted into an attitude of superiority by the Europeans as they continued to expand and colonize.

Vigée’s haunting portrait of Dervish Khan is compelling for many reasons, particularly as it captures this very unique moment in history. On the eve of Revolution, a female artist in France gloriously captures a striking foreigner, a Muslim ambassador from India, as he encounters the exotic world of Paris: in hindsight, the portrait is even more powerful than the sitter himself had hoped to be portrayed.