By Sotheby's
As the final 991 chassis to enter and leave production, this Porsche 911 Speedster shows 70 years of design heritage and engineering refinement.

O n 26 September 2019, the official build sheet for the last of a limited-edition run of Porsche Speedsters was submitted to Porsche Cars North America. By December, production on the final Speedster began at Porsche’s Stuttgart-Zuffenhasen facility. 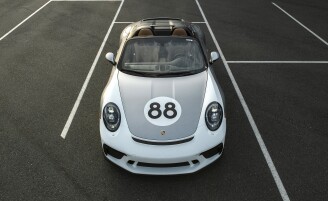 Built in a run of 1,948 to reflect the year that the first Porsche 356 “No. 1” roadster was registered in Carinthia, Austria, this 2019 Porsche 911 Speedster “Heritage Design” is the last 991-series 911 chassis ever built, and it represents seven decades of continuous refinement and dedication on the part of Porsche’s engineers. The finished product is both a reflection of how sports car technology has evolved during that time, as well as a tribute to Porsche history, with numerous details that fans of the brand will definitely appreciate.

One detail is most critical: This spectacular Speedster is set to be auctioned in a special one-week, online-only auction to benefit United Way Worldwide’s COVID-19 Community Response and Recovery Fund. The auction’s consigner is none other than Porsche Cars North America, supported by RM Sotheby’s. This is an opportunity to give back to those in need, while at the same time bidding on a money-can’t-buy package that would appeal to any Porsche enthusiast.

Not simply an auction for a unique Speedster, Porsche has included several one-of-a-kind accessories to increase interest in the sale. The winning bidder will also be invited behind-the-scenes at the Porsche AG development facilities in Weissach, and have an opportunity to spend time lapping the test track outside the Development Center with Dr. Frank-Steffen Walliser, the head of Porsche’s 911 model line, and Andreas Preuninger, the head of the brand’s vaunted GT division.

Preuninger’s GT team has earned many accolades for their work transforming the top-end of the 911 sports car lineup into formidable, track-focused machines that still performed admirably on public roads. Underneath its lightweight body panels, the Speedster rides a chassis derived from the 911 GT3, with a slightly softer dampening setup. It is powered by the same 4.0-liter horizontally opposed six-cylinder engine as in the 911 GT3 but tuned to produce even more horsepower via high-pressure fuel injectors and individual throttle valves. Unlike its more aggressive siblings, the Speedster’s six-speed manual transmission will auto-blip the throttle on downshifts even when the car is set in “Comfort” mode. With an eye towards weight-reduction and the latest in materials science, Porsche’s engineers achieved a curb weight of 1,465 kg – identical to the standard 991-era 911 Cabriolet, in spite of all the performance upgrades.

From its inception as a model suggested by legendary New York importer Max Hoffman, Porsche’s original 356-based Speedster was made especially for the American market. With a minimalist interior and race-ready performance, it quickly became a favorite of Hollywood stars like James Dean, who owned a Speedster and took it racing at Sports Car Club of America meets on the numerous circuits outside Los Angeles.

This same spirit of motorsport is reflected in this Speedster’s “Heritage Design” package, originally a $24,510 option, which encompasses appearance details inside and out. The classic ‘PORSCHE’ side graphics and “lollipop”-style White-over-GT-Silver-Metallic paint scheme surrounding a start number chosen by Porsche, should prove functional should the new owner wish to take their new Speedster racing. The interior is inspired by classic color schemes from Porsche’s past, with a black dashboard to minimize reflections, and carbon fiber composite chairs upholstered in Cognac leather.

As the first and only owner of this ultimate Speedster was Porsche themselves, the lot on offer is as close to new as possible, its odometer shows less than 30 miles. The winning bidder will get to collect their prize at a dedicated event in the U.S. hosted by Klaus Zellmer, President and CEO of PCNA, along with two exceptional additional bonus offerings: The first is a one-of-a-kind book, documenting the production of the final 991-era 911, with photographs of its construction and an original pencil sketch of the Speedster drawn by its designers. Bound in the same leather that lines the car, this large-format book that accompanies the Speedster is the only edition that will ever be printed.

The final piece in an exceptional package is a matching-numbers timepiece made by Porsche Design, with a proprietary movement and a flyback chronograph complication. With an integrated strap made of the identical Cognac leather to match the Speedster, the CSOC-certified chronograph features a beautifully minimalist face, with interior dials reminiscent of the VDO gauges in the original 356-based Speedster. Turning the titanium watch over reveals an exhibition caseback, with the silver winding rotor that powers the automatic movement mirroring the modern Speedster’s lightweight wheels; the identical chassis number is laser-engraved on the back. The timepiece itself is valued at $10,000.

For the ultimate Porsche fan, nothing less than the ultimate Porsche 991-era 911 will do. Presented with an extraordinary list of options and accessories, auctioned for a charitable cause with an urgent need, and offered without reserve, this one-week, time-based auction will be a must-watch event – one which we can all safely attend online. Bidding is set to open at 11:00 am EDT on Wednesday 15 April, and set to close at 1:00 pm EDT on Wednesday 22 April. For more information, and to register for bidding, please visit Online Only: A Porsche with Purpose.